"Sustainability: Water" video series examines the long-term health of one of America's most important resources 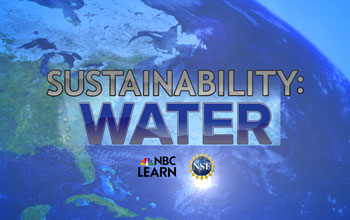 The National Science Foundation (NSF) and NBC Learn (NBC News' educational arm) have teamed up to produce a new informative video series that examines the long-term health of one of America's most important resources: water.

As climate rapidly changes and population grows, providing a sufficient supply and quality of water will be a critical challenge to people everywhere. These videos aim to help advance public understanding of the effects human activity and climate variability have on water and its distribution system.

The series highlights research funded by NSF and looks at the lives of scientists who are hard at work on projects designed to help pave the way to a more sustainable future. Each video features an NSF-supported scientist from a diversity of fields, geographic locations and institutions explaining a specific challenge and how these challenges are affecting the water supply. Each episode is available cost-free to teachers, students and the public at NSF and NBCLearn.com websites.

"Most Americans take water for granted," said Roger Wakimoto, assistant director for NSF's Directorate for Geosciences. "We have occasional water restrictions, but for most of us, when we turn on the tap, water is there. This series with NBC Learn aims to help people become more conscious of the threats to our water supply and understand the steps that need to be taken to maintain it."

This video uses animation and graphics to explain each of the "flow" and "storage" processes in the Water Cycle: precipitation, interception, run-off, infiltration, percolation, groundwater discharge, evaporation, transpiration, evapotranspiration and condensation.

Farmers in Kansas and other states that sit atop the Ogallala aquifer--the largest freshwater aquifer in North America--are pumping out water for crop irrigation far faster than natural seepage of rainwater can replenish it. Scientist David Hyndman from Michigan State University is helping develop a plan to better manage this vital resource for sustainable farming.

Snow melt from the snow pack in Sierra Nevada mountain range provides drinking water to about 30 percent of California's residents, irrigates key crops in the San Joaquin valley and runs hydroelectric power plants that supply at least 15 percent of the state's electricity. Martha Conklin and Tom Harmon of the University of California, Merced use wireless sensor technology to more accurately measure snow pack and snow melt so that state water managers can make better decisions on how to allocate this resource.

4. Sustainability: Water--dead trees and dirty water in the Rockies

The Rocky Mountains supply water to more than 60 million people in the West, but this watershed is in peril due to a tiny insect: the mountain pine beetle. Millions of trees killed by these "bark beetles" have dropped branches that once intercepted snow; snow now falls directly on the ground and runs off more quickly and contaminated by decaying tree "litterfall." Hydrologists Reed Maxwell of Colorado School of Mines and John Stednick of Colorado State University are studying the impact of the beetle-killed trees on water quantity and quality in the area.

The nearly 10 million people in Los Angeles, Calif., require a lot of water--most of which is imported snow melt from the Eastern Sierra Nevadas and Rocky Mountains hundreds of miles away. University of California, Los Angeles researchers Stephanie Pincetl and Mark Gold are studying how Los Angeles can reduce its water imports and better capture, store and reuse water for a more sustainable water supply.

The Chesapeake Bay, a natural habitat and watershed providing fresh water for Baltimore, Md., faces an environmental crisis: nitrate pollution in run-off from a range of sources. Claire Welty of the University of Maryland-Baltimore County is studying run-off through city water systems and "urban streams" in and around Baltimore, in hopes that a better understanding of the urban water cycle will help municipalities reduce or prevent watershed pollution.

In 2011, Lake Erie suffered an unprecedented bloom of toxic blue-green algae, a concern to millions who use the lake for drinking water, agriculture, manufacturing and tourism. Stanford University's Anna Michalak, University of Toledo's Thomas Bridgeman and Heidelberg University's R. Peter Richards are among those studying how agricultural runoff, plus changes in precipitation, may increase nutrient flow into Lake Erie that can "feed" potentially dangerous algae blooms.