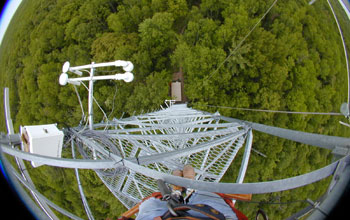 Above the forest canopy: looking down at the trees from a Michigan eddy-covariance tower.

Spurred by increasing levels of atmospheric carbon dioxide, forests over the last two decades have become dramatically more efficient in how they use water.

Harvard Forest is one of 26 such NSF LTER sites in ecosystems from deserts to grasslands, coral reefs to coastal waters, around the world.

Studies have long predicted that plants would begin to use water more efficiently, that is, lose less water during photosynthesis, as atmospheric carbon dioxide levels rose.

A research team led by Trevor Keenan and Andrew Richardson of Harvard University, however, has found that forests across the globe are losing less water than expected and becoming even more efficient at using it for growth.

Using data collected in forests in the northeastern United States and elsewhere around the world, Keenan and Richardson found increases in efficiency larger than those predicted by state-of-the-art computer models.

The research was done in collaboration with scientists from the USDA Forest Service, Ohio State University, Indiana University and the Karlsruhe Institute of Technology in Germany.

"This could be considered a beneficial effect of increased atmospheric carbon dioxide," said Keenan, the first author of the Nature paper.

"What's surprising is we didn't expect the effect to be this big. A large proportion of the ecosystems in the world are limited by water--they don't have enough water during the year to reach their maximum potential growth.

"If they become more efficient at using water, they should be able to take more carbon out of the atmosphere due to higher growth rates."

While increased atmospheric carbon dioxide may benefit forests in the short-term, Richardson emphasized that the overall climate picture would remain grim if levels continue to rise.

"There is little doubt that as carbon dioxide continues to rise--and last month we just passed a critical milestone, 400 parts per million for the first time in human history--rising global temperatures and changes in rainfall patterns will, in coming decades, have very negative consequences for plant growth in many ecosystems around the world."

How do increasing carbon dioxide levels lead to more efficient water use?

The answer, Keenan said, is in the way photosynthesis works.

To take in the carbon dioxide they need, plants open tiny pores, called stomata, on their leaves. As carbon dioxide enters, however, water vapor is able to escape.

Higher levels of carbon dioxide mean the stomata don't need to open as wide, or for as long, so the plants lose less water and grow faster.

To take advantage of that fact, commercial growers have for years pumped carbon dioxide into greenhouses to promote plant growth.

To test whether such a "carbon dioxide fertilization effect" was taking place in forests, Keenan, Richardson and others turned to long-term data measured using a technique called eddy covariance.

This method, which relies on sophisticated instruments mounted on tall towers extending above the forest canopy, allows researchers to determine how much carbon dioxide and water are going into and out of the ecosystem.

With more than 20 years of data, the towers at the NSF Harvard Forest LTER site--which have the longest continuous record in the world--are an important resource for studying how forests have responded to changes in atmospheric carbon dioxide levels, scientists say.

"A goal of the NSF LTER program is understanding forest ecosystems and the basis for predicting fluxes of energy and materials in these ecosystems," said Matt Kane, program director in NSF's Division of Environmental Biology, "as well as distributions of forest biota as a result of global climate change."

"Findings from this study are important to our understanding of forest ecosystems--and how they can be managed more effectively now and in the future."

Though more than 300 towers like Harvard Forest's have sprung up around the globe, many of the earliest--and hence with the longest data records--are in the northeastern United States.

When the researchers began to look at those records, they found that forests were storing more carbon and becoming more efficient in how they used water.

The phenomenon, however, wasn't limited to a single region. When the scientists examined long-term data sets from all over the world, the same trend was evident.

"We went through every possible hypothesis of what could be going on, and ultimately what we were left with is that the only phenomenon that could cause this type of shift in water-use efficiency is rising atmospheric carbon dioxide," Keenan said.

Going forward, Keenan, who is now at Macquarie University in Sydney, Australia, is working to get access to data collected from yet more sites, including several that monitor tropical and arctic systems.

"This larger dataset will help us better understand the extent of the response we observed," he said.

"That in turn will help us build better models, and improve predictions of the future of the Earth's climate.

"Right now, all the models we have underrepresent this effect by as much as an order of magnitude, so the question is: What are the models not getting? What do they need to incorporate to capture this effect, and how will that affect their projections for climate change?"

The research was also supported by NOAA. Field measurements at the sites, which are part of the AmeriFlux network, have also been funded by the U.S. Department of Energy and the USDA Forest Service.