Designed and built by students, device was deployed in the field in the world's harshest waters 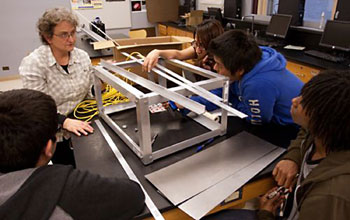 Paula Dell with the Fish Spy and her students.

For a copy of the video taken in the Antarctic by the Fish Spy camera, contact Dena Headlee at (703)292-7739 or dheadlee@nsf.gov.

The icy Southern Ocean that surrounds Antarctica is about as cold, stormy and inhospitable a body of water as can be imagined. But thanks to the ingenuity of a group of high-school students, their teacher and a miniature video camera on a cable, it has also become a real-life classroom for budding marine engineers.

Using a camera and cable donated by an Arizona company whose owner has a keen interest in marine education, four students at Lindblom Math and Science Academy in Chicago, built an underwater device that braved the waters--off the National Science Foundation's (NSF) Palmer Station near the Antarctic Peninsula--to bring back video of the habitat of Antarctic fish.

Palmer is one of three year-round research stations that NSF operates as manager of the U.S. Antarctic Program.

The Fish Spy, as the teacher-student team dubbed it, was deployed in late June by Paula Dell, a teacher at Lindblom, a high school in Chicago's West Englewood neighborhood.

Dell deployed to Antarctica as part of the NSF-funded Polar Teachers and Educators Exploring and Collaborating (PolarTREC) program. PolarTREC is administered by the Arctic Research Consortium of the United States.

Fish Spy is comprised of a metal cage enclosing a video camera that Dell envisioned being dragged behind research vessels through the ocean on a long cable to keep an electronic eye on the creatures below the surface.

Dell's students had been designing and building Remotely Operated Vehicles for regional competitions for many years. So it was only natural for NSF-funded researchers Kristin O'Brien, with the University of Alaska Fairbanks, and Elizabeth Crockett from Ohio University to suggest that Dell's students build something that could be "towed behind the ship to learn something about the habitat of the animals we study."

O'Brien and Crockett, who collaborate with Dell as part of PolarTREC, study several species of fish that are uniquely adapted to life in the extreme conditions of the Southern Ocean, which is isolated from other oceans by the Antarctic Circumpolar Current. Southern Ocean temperatures hover at or near -1.8 degrees Celsius (28.76 degrees Fahrenheit), and the water is rich in oxygen.

The so-called icefish have evolved many physiological traits that enable them to survive in their ecological niche. Like most other Antarctic fishes, they lack a swim bladder and have antifreeze proteins that keep their blood from freezing. But what sets them apart from all other vertebrates and other Antarctic fishes is their lack of the circulating oxygen-binding protein, hemoglobin.

Rising to the challenge

So, rising to the challenge from the researchers, the students, Liliana Diaz, Francisco Flores, Miguel Limon and Raymond Thicklin, set to work designing, building and then refining their creation in the school swimming pool.

"They did a lot of research to decide what to make it out of and finally settled on aluminum," Dell said, noting that Campbell "Buzz" Scott, president of OceansWide, a non-profit ocean-education organization "was a great avenue for advice" on building the device.

The Fish Spy then was fitted with specialized video equipment donated to the project by Lights Camera Action, LLC, an underwater lighting and camera manufacturer in Arizona. The company is owned by Walter Ahland, who formerly served as a technology instructor in Illinois.

Lights Camera Action sponsors Marine Advanced Technology Education (MATE) competitions by providing underwater cameras at cost to schools, such as Dell's, that are involved in the MATE program.

"Lights Camera Action wants to acknowledge teachers like Paula who go beyond the classroom to bring real-life technology to students. Their recognition comes from the light in the students' eyes and the awareness by the students that 'someone cares,'" Ahland said. "With our sponsorship, we hope to enable schools to provide technology that instills a desire to learn for the students and also for the teachers."

He noted that sponsorship is available for all schools in the United States and Canada.

Working with Lights Camera Action, "we found this amazing little digital video recorder that fits in the palm of your hand," Dell said. "It allowed us to watch the action in real time and record it on a microSD card as well."

After a trial in the school pool, it was on to a more challenging environment.

"We deployed in Lake Michigan, which was really murky and you couldn't see anything, so we really [had] no idea how [it was] going to work," Dell said.

But by mid-June, Fish Spy was ready for its Antarctic sea trials, searching for underwater life after being launched from the deck of the Laurence M. Gould, an NSF-chartered, ice-strengthened research vessel.

However, to employ a catchphrase frequently heard in the Antarctic, "It's a Harsh Continent," with little respect for researchers' or a teacher's best intentions. The conditions aboard the Gould at sea, which challenge the stoutest ocean-going vessels, were just too rough for Fish Spy and prohibited the ship from safely seeking out shallower waters for a trial.

But with assistance from marine technicians from Lockheed Martin Corp., NSF's Colorado-based Antarctic support contractor, Fish Spy was deployed from an inflatable Zodiac in the waters around Palmer Station, capturing not only images of Antarctic fish but other bottom-dwelling creatures such as limpets and sea stars, as well as shots of the underside of small icebergs, so called "bergy bits." Fish Spy also allowed a peek at the sunken wreck of the Bahia Paraiso, which ran aground in 1989, roughly two miles from Palmer Station.

Although not accomplishing quite all that she or her students had hoped it would, Fish Spy became another in a suite of PolarTREC educational tools--from blog posts to pictures--that Dell used to widen her students' educational horizons.

"I've sent them an e-mail and let them know what's going on and put a short clip of the algae on the blog that shows them that the camera and their frame works," she said. "It's nothing huge, but I think the kids will be excited by the fact that they designed something that was actually deployed in the field and that functioned well. I think they will be excited to see the fish and other interesting things we caught on video."