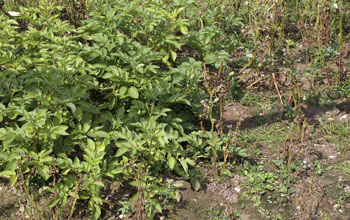 Late-blight-resistant potato plants, on left, compared with potatoes suffering from the disease

In the battle between diseases and plants--constant, changing and centuries old--scientists and farmers usually arm themselves through classical breeding, crossing varieties in the hopes of eventually reaching disease resistance. With advances in DNA sequencing and genetics, however, they may soon have a more sophisticated weapon: disease-resistant seeds.

Basic research on the genetic gears of plant immune systems has advanced so much that scientists can now begin applying that knowledge, building healthier plants to decrease dependence on pesticides, water overuse and help agriculture in developing countries, according to a paper in this week's edition of the journal Science.

The paper was also authored by Brian Staskawicz, plant and microbial biology professor at the University of California, Berkeley, and Diana Horvath, director of the Two Blades Foundation, a Chicago-area nonprofit promoting plant disease resistance research and application. NSF funds have helped fuel the research of all three.

The paper synthesizes two decades of research on plant immune systems, looking at "where technology has been applied, and what the future can be," said Staskawicz.

For more than a century, disease resistance in plants has been achieved through traditional breeding, a process that requires the "patience of Job," Dangl said. "Imagine waiting till you get to your grandchildren to see how your offspring turn out."

Disease-causing microbes multiply much, much faster. Modern agriculture--predominately single crops grown over many acres instead of the diversity hodgepodge seen in nature--also favors pathogens, microbial agents that cause disease.

Globally, about 15 percent of crop harvests are lost each year due to disease, but destruction varies greatly from crop to crop. Cassava blight, which attacks a staple food source in many developing countries, can destroy 20 to 100 percent of crops. Most loss occurs late in a crop's life, gallons and gallons and gallons of water in. "Plant diseases are a huge waste of water," Dangl said.

To combat pathogens, farmers rely on disease-resistant plant varieties--cultivated by careful, slow breeding--and pesticides. Both are far from foolproof. Pathogens evolve to outwit breeding and pesticides often carry harmful environmental side effects. Some farmers, like those in developing countries, also can't afford them. Creating disease resistant seeds, requiring little-to-no pesticides and no unfamiliar agricultural techniques, is "a simple and effective way to help farmers in developing countries," Horvath said.

Classical breeding has given plant researchers a wealth of genetic material, developed over generations, with which to breed disease resistant varieties. Combined with leaps and bounds in genetics research and quicker, cheaper DNA sequencing, scientists have learned how to build stronger plant varieties. They have pinpointed special receptors, housed both inside and outside plant cells, which scan for infection; launching the attack when a pathogen is found. They've identified disease-resistant genes housed in the molecular architecture of different plants. These genes can confer resistance to dangers such as wheat rust, powdery mildew and bacterial spot disease.

"We now know enough about the key molecules in the plant immune system that we can actually start to deploy what we've learned," said Dangl. This includes genetic editing--removing disease-prone genes--or mining disease-resistance genes from various plants and adding them into other crops. Combining a few disease-resistance genes would bolster plant immunity to multiple diseases, similar to the chemical cocktail developed to fight AIDS.

This has already been successful. Disease resistance genes bred into papaya helped save Hawaii's papaya industry from a ringspot virus in the mid-90s. Staskawicz and Horvath also worked to develop tomato plants resistant to bacterial pathogens. In Florida field tests, the modified varieties have higher yields and don't require harmful copper pesticides.

Still, researchers have much to learn. How all these disease resistance genes function, on a molecular basis, is to be discovered.  Staskawicz compares it to watching TV. You know if you press a certain button, the TV comes on, without understanding any mechanics behind the screen. "You can still use the gene without knowing exactly how it works," he said. Pathogens will also continue evolving, slowly subverting genetic disease resistance, engineered or not. "It's a constantly evolving process," Staskawicz said.

There are no simple solutions, said Michael Mishkind, a program director in NSF's Biological Sciences Directorate. Yet our current level of understanding of disease resistance mechanisms "speaks eloquently to the importance of basic research. Years of fundamental study of the plant immune system have added a powerful set of tools, helping us keep ahead of the pathogens that threaten our food supply."