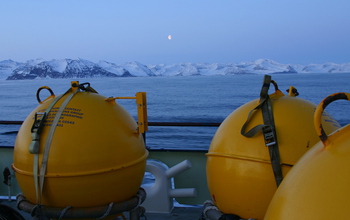 OSNAP will span the Irminger Sea in the North Atlantic Ocean; the sea is known for rough weather.

In an effort to study the circulation of ocean waters, a key component of the global climate system, the National Science Foundation (NSF) has awarded $16 million in grants over the next five years to oceanographers at Duke University, the Woods Hole Oceanographic Institution (WHOI) and the University of Miami.

The scientists will deploy a new observing system in the sub-polar region of the North Atlantic Ocean. The five-year effort is part of the U.S.-led Overturning in the Subpolar North Atlantic Program (OSNAP).

"OSNAP is an excellent example of what NSF strives to accomplish," says Roger Wakimoto, NSF assistant director for Geosciences.

"It's an ambitious, community-driven project that builds strong international partnerships with our European and Canadian colleagues to study a complex and critical region in the climate system. It also effectively leverages NSF's investments in ocean observing infrastructure."

U.S. principal investigators for OSNAP are Susan Lozier of Duke University; Fiamma Straneo, Robert Pickart and Amy Bower of WHOI; and William Johns of the University of Miami.

Straneo will also direct an effort to bring together scientists focused on the North Atlantic Ocean in a virtual space where they can interact, exchange ideas and work cooperatively across international boundaries.

Called the North Atlantic Virtual InStitute (NAVIS), the project is part of a larger NSF program called Science Across Virtual Institutes, or SAVI.

These currents form the overturning circulation that plays a role in redistributing heat from the equator to the poles. That overturning carries warm, shallow waters to northern latitudes and returns cold, deep waters southward across the equator.

Recent modeling studies show that a change in the strength of this circulation would have a critical effect on temperatures and precipitation in North America, Europe and Africa.

"In addition to measuring the variability of ocean overturning, OSNAP is focused on understanding what factors create those changes," says Lozier.

OSNAP data will facilitate the study of how the northward flow of warm water affects the reduction of Arctic sea ice and the shrinking of the Greenland Ice Sheet.

"Oceanographers have known that overturning circulation is susceptible to changes in the temperature and salinity of surface waters in the sub-polar North Atlantic," says Lozier.

"With increasing ocean temperatures, and increased ice melt that affects the salinity of surface waters, it's important to establish how climate change might affect the strength of overturning circulation."

The oceanographers will deploy moored instruments and sub-surface floats across the sub-polar North Atlantic during the summer of 2014. The measurement period will last until 2018.

"Greenland's margins are a great place to take the pulse of Atlantic overturning circulation in high latitudes," says Straneo.

"This is where equatorward-flowing fresh water from the Arctic meets poleward-flowing warm Atlantic Ocean water--and where the two are progressively cooled and transformed into denser waters.

"Beneath these waters, we can also observe the equatorward flow of even denser waters formed in the Nordic Seas."

The array of instruments will stretch along two lines, from Labrador to southern Greenland and from Greenland east to Scotland.

The instruments will provide scientists with continuous measurements of surface-to-bottom water temperature, salinity and velocity in areas of the sub-polar ocean that historically have been under-sampled.

The trajectories of sub-surface floats will offer the first look at deep-water pathways in the North Atlantic.

"This project provides the first opportunity to directly link changes in the intensity of the North Atlantic overturning circulation with the air-sea interaction processes that drive deep water formation," says Johns.

OSNAP will be one of the first projects to make use of the NSF-funded Ocean Observatories Initiative's (OOI) array of moored sensors that will be installed in the Irminger Sea off the southern tip of Greenland in 2014.

The Irminger Sea is one of four planned global observing sites of the OOI program, a networked infrastructure of science-driven sensor systems to measure the physical, chemical, geologic and biological variables in high-latitude and coastal ocean locations, as well as at the sea-floor.

The OSNAP measurement system also complements a joint U.S.-U.K. project called MOCHA-RAPID. MOCHA is primarily funded by NSF; RAPID is funded by the Natural Environment Research Council in the U.K. Scientists participating in the project have measured the overturning circulation in the sub-tropical North Atlantic since 2004; MOCHA-RAPID has been extended through 2020.

"The OSNAP project will greatly enhance our ability to track changes in the circulation of the North Atlantic Ocean, a critical component of understanding future climate and its effects on marine ecosystems," says David Conover, director of NSF's Division of Ocean Sciences.

Overturning data are also critical to understanding the ocean's continued ability to act as one of Earth's most important carbon sinks.

Surface waters absorb heat-trapping carbon dioxide from Earth's atmosphere. When cold, dense, southward-flowing waters from sub-polar regions sink, they carry these surface waters--and much of the carbon dioxide they contain--to the ocean's depths, where it is no longer available to heat Earth's climate.

"Because the storage of carbon at depth is linked to overturning circulation, OSNAP takes on added importance," says Lozier. "A critical question for climate scientists today is: How much carbon will continue to be stored in the ocean?"