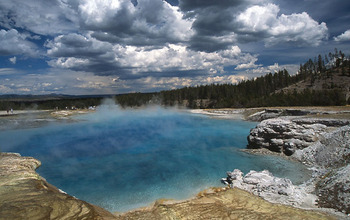 Yellowstone's hot springs will be sampled in an NSF Dimensions of Biodiversity project.

The diversity of life on Earth is seemingly endless, yet much still remains to be discovered. With climate change and habitat loss threatening that biodiversity, the challenge of discovery is a race against time.

To fill the gaps in understanding our planet's biodiversity, the National Science Foundation (NSF) has awarded 13 grants totaling $25 million in the fourth year of its Dimensions of Biodiversity program.

Dimensions of Biodiversity is part of NSF's Science, Engineering and Education for Sustainability investment.

Centuries of biological research have established a strong foundation for our understanding of biodiversity.

In the past, however, researchers have sought to understand a single dimension of biodiversity--the diversity of species at the genetic level, species diversity in a taxonomic group, or the diversity of roles certain species play in an ecosystem.

Scientists funded by the Dimensions of Biodiversity program, however, integrate genetic, taxonomic, and functional approaches in their study and exploration.

The Dimensions of Biodiversity awards are supported by NSF's Directorates for Biological Sciences and Geosciences along with NASA, which co-funds projects that use state-of-the-art remote sensing technologies.

Collaborative projects between U.S. and Chinese, and U.S. and Brazilian researchers are co-funded by the National Natural Science Foundation of China (NSFC) and the Sao Paulo Research Foundation (FAPESP), respectively.

"The resulting discoveries go beyond expanding our knowledge of the depth and breadth of life on Earth," says John Wingfield, NSF assistant director for Biological Sciences.

"The synergy created by integrating recent technological advances with collaborations across disciplines and across continents allows these researchers to make significant progress in our understanding of biodiversity."

This year's Dimensions of Biodiversity awardees will study subjects such as: the biota of the critically endangered Brazilian Atlantic forest; microbes living in deep shale deposits; the adaptive radiation of bird lice; the diversity of gut flora in herbivorous woodrats; interactions between floral scents and pollinators; and succession in forests of the Thousand Island lakes area in China.

Mary Ann Moran, University of Georgia, Dimensions: Bacterial taxa that control sulfur flux from the ocean to the atmosphere

Lin Jiang, Georgia Institute of Technology, Dimensions: Phylogenetic, functional, and genetic diversity and ecosystem functions in a fragmented landscape (Co-funded by the NSFC)