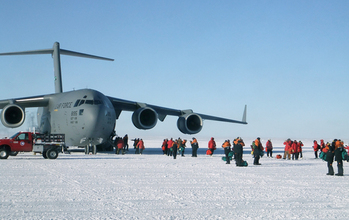 Passengers disembark from an Air Force C-17 in Antarctica in this 2011 photo.

NSF, which has a Presidential mandate to manage the U.S. Antarctic Program, was required to suspend most of its activities in Antarctica during the recent 16-day partial shutdown and move towards a reduced operations, or "caretaker" status at each of the three U.S. Antarctic stations, until federal funding could be restored.

In mid-October, after a Continuing Resolution was approved to keep the government running until mid-January, NSF and its U.S. Antarctic Program partners began examining the planned research schedule to see how much could still be accomplished by the end of the field season, in February of 2014, while simultaneously ramping back up the complex logistical framework needed to support the science.

The 16-day interruption caused some early-season research in the vicinity of McMurdo Station to be deferred--either because of the complexity of the logistics needed to support the science or because the research itself was planned for a short and specific duration--and also delayed preparations for research scheduled to take place later in the season. Research that was deferred this season, but that will be supported next year, will displace new starts from the proposals currently in review.

Despite the setbacks, a cooperative effort among NSF; the agency's operations and research support contractor, Lockheed Martin; the Department of Defense, which provides critical airlift and other support to the program; and other U.S. agencies has allowed NSF to develop a schedule for deploying researchers to recover the tempo of research to the extent possible.

The process of recovery from the shutdown is ongoing and schedules still evolving, but as of Oct. 24, 2013, some 49 of the 77 scheduled projects in the McMurdo area will deploy this season, with some of those 49 deploying with reductions or modifications in scope, but in a way that allow them to meet the principal science goals for the season. Projects may include one or more investigators supported by separate grants.

Also as of Oct. 24, a total of 13 planned deployments in the McMurdo vicinity have been deferred for various reasons. A further 15 projects remain to be evaluated.

Although the program weathered a long federal government shutdown in the 1990's, the circumstances were different than this year's, because that shutdown occurred later in the fiscal year.

The unusual circumstances, unique in the Antarctic Program's more than 50-year history, have caused the cancellation of some large-scale research for the season, including most of the support for NASA's Long-Duration Balloon facility; a camp on Mt. Erebus, atop the world's southernmost active volcano; a field camp for the West Antarctic Ice Sheet (WAIS) Divide project; and an over-ice traverse to support portions of the Whillians Ice Stream Subglacial Access Research Drilling (WISSARD) Project.

Principal investigators on deferred projects have been alerted to their status.

NSF's decisions about which projects it is able to support were based upon a range of factors, including:

NSF maintains three year-round stations in Antarctica: McMurdo, Amundsen-Scott South Pole and Palmer. The effects of the shutdown were felt most among projects based from McMurdo Station, on Ross Island.

Although some effects will be felt at South Pole, the station opens later in the research season than McMurdo and the effects are anticipated to be primarily related to potential delays of the delivery of science cargo or movement of people.

Palmer, on the Antarctic Peninsula near South America, is the smallest of the three stations and is supported by a different logistical stream than the other two stations. Research at Palmer Station and on the USAP research vessels Nathaniel B. Palmer and the Laurence M. Gould is expected to proceed largely as planned.

Collectively, the science at these stations represent approximately 100 additional projects.