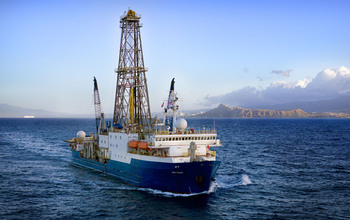 With authorization from the National Science Board (NSB), the National Science Foundation (NSF) will enter into a cooperative agreement with the Texas A&M Foundation for the management and operation of the scientific ocean drilling vessel JOIDES Resolution, which is part of the new International Ocean Discovery Program (IODP). The five-year agreement will begin on Oct. 1, 2014, with the potential for NSF awarding up to $250 million and the international community contributing about $87.5 million. The actual amount of funding will be subject to the availability of funds and continuing scientific priorities.

The JOIDES Resolution has fostered U.S. leadership in scientific ocean drilling as well as increased participation of the broader international geoscience community. The NSB determination was approved based on the knowledge that a decadal survey conducted by the National Academy of Sciences is underway. The survey will assess the current state of knowledge in the ocean sciences and related disciplines, define priorities for the coming decade, and conduct a portfolio analysis including the JOIDES Resolution. The survey is expected to be completed in April 2015.

"Research aboard the JOIDES Resolution has contributed to our knowledge about Earth's climate, ancient sea levels, continental drift, volcano formation and the onset of earthquakes," said Roger Wakimoto, assistant director for the NSF geosciences directorate (GEO). "NSF must continue to define priorities regarding supporting infrastructure and funding researchers, and we look forward to the recommendations of the decadal survey about how to balance our ocean sciences portfolio."

NSF expects to support about four JOIDES Resolution expeditions per year under the cooperative agreement. The JOIDES Resolution is operating currently under a one-year extension of the previous 10-year award to the Consortium for Ocean Leadership.

"The JOIDES Resolution has played an essential role in NSF's rich legacy of scientific ocean drilling, which began in the 1960s," said David Conover, division director for GEO's ocean science. "While the JOIDES Resolution has been a workhorse for NSF's pioneering efforts in this area, we remain committed to exploring the oceans and the seafloor using the most sophisticated technologies and sensors on a wide variety of platforms while striving for cost effectiveness on behalf of the American taxpayer."

In partnership with the international community, NSF supports the IODP in advancing basic research in the marine geosciences. In the 1960s, the Deep Sea Drilling Project provided a test of the plate tectonic hypothesis and a basic reconnaissance of deep sea sediments and crustal rocks. This was followed in 1985 by the Ocean Drilling Program, which focused on examination of Earth, ocean and climate processes. The current Integrated Ocean Drilling Program began in 2003 and has served as an expanded program of scientific ocean drilling.