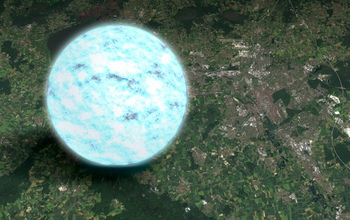 The combination of globally distributed computing power and innovative analysis methods is now a proven formula for the discovery of new once-elusive pulsars.

Scientists from the Max Planck Institutes for Gravitational Physics and Radio Astronomy together with volunteers from Australia, Canada, France, Germany, Japan and the United States discovered four gamma-ray pulsars in data from the Fermi Gamma-ray Space Telescope, thanks to Einstein@Home.

Funded by the National Science Foundation (NSF) since 2005, Einstein@Home creates a global supercomputer by connecting more than 350,000 participants, and is therefore one of the largest projects of this kind.

"This demonstrates that at its core, Einstein@Home is not only sound, but powerful," said Bruce Allen, leader of the Einstein@Home project, Max Planck Institute director and adjunct professor of physics at the University of Wisconsin-Milwaukee. "Harvesting the enormous computing power offered by our volunteers from all over the world makes it possible to find a needle--or in this case, four--in a haystack."

This discovery is significant for another reason. "Because the pulsars are young and still in an unstable, childhood phase, they are scientifically exciting," continued Allen. "We'll be able to learn more about the processes by which pulsars form and how they evolve."

NSF supports activities in which citizens from all over the world participate in scientific discoveries termed "Citizen Science."

"This discovery proves again that harvesting the enormous computing power offered by volunteers can be effective in pursuing significant scientific discoveries, plus it represents an important milestone for Einstein@Home," said Bogdan Mihaila, a program manager in NSF's Nuclear Theory and Computational Physics Division.

"Einstein@Home has already resulted in the discovery of new radio pulsars buried in the data collected by the Arecibo Radio Telescope and Parks Radio Telescope. Now, in an expansion of the capability, the project brings the discovery of four gamma-ray pulsars, which, more elusive and rare, uncover new insights from a different part of the electromagnetic spectrum, giving scientists a better representation of what's out there."

More information on the significance of this finding is in the press release from the Max Planck Institute for Gravitational Physics: Einstein@Home volunteers find four cosmic lighthouses in data from NASA's Fermi Gamma-ray Space Telescope.

Einstein@Home is a joint project of the Center for Gravitation and Cosmology at the University of Wisconsin-Milwaukee and the Albert Einstein Institution in Hannover, Germany. It is funded by NSF and the Max Planck Society.

Since mid-2011, Einstein@Home has been searching for signals from gamma-ray pulsars in Fermi space telescope data. The project was founded in 2005 to search for gravitational-wave signals in data from LIGO (Laser Interferometer Gravitational-Wave Observatory) detectors, a large-scale physics experiment conducted in Washington state--still the main task of Einstein@Home. Since early 2009, the project has also been conducting successful searches for new radio pulsars in observational data from the Arecibo Observatory in Puerto Rico and the Parkes Observatory in Australia. Since the first discovery of a radio pulsar by Einstein@Home in August of 2010, the global computer network has discovered more than 50 new radio pulsars.

A new search for gamma-ray pulsars in data of the Fermi satellite was added in August 2011. It made the four discoveries reported now. The project is looking for, among other things, the first millisecond pulsar, visible only in the gamma-ray range.

In the future, efficient search methods will become increasingly important, since Fermi is scheduled to take data for at least another five years. The longer the measurement time, the weaker the pulsars the scientists can discover. With increasing measurement time, however, the computational costs grow quickly. Conventional methods are already too costly at present, but there is still headroom for the new methods. By using the distributed computing power provided by the Einstein@Home volunteers, researchers hope more gamma-ray pulsars that are particularly far away or faint may be discovered.