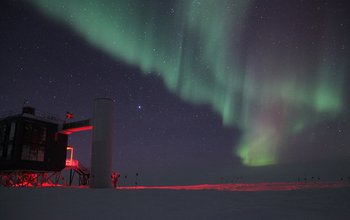 The IceCube Neutrino Observatory's first-ever observations of cosmic neutrinos leads the list, which also includes a separate discovery made by the 10-meter telescope at the South Pole.

The IceCube Collaboration, an international group of institutions that operates the detector's science and operations, published the first evidence for a number of very high-energy astrophysical neutrinos in Science magazine in late November, opening what Principal Investigator Francis Halzen, Hilldale and Gregory Breit Professor at the University of Wisconsin-Madison, hailed as "the dawn of a new age of astronomy."

Neutrinos had been proposed as the perfect "cosmic messengers" as long ago as the 1960s. Because they very rarely interact, neutrinos are expected to bring information to Earth from the deepest recesses of the universe. It's only in such extreme environments like black holes and neutron stars that the most energetic particles ever observed, the so-called ultra-high-energy cosmic rays, could have been produced. However, a huge detector was needed to catch those neutrinos even in small numbers.

"The ability to detect cosmic neutrinos is a remarkable achievement that gives astronomers a completely new way of studying the cosmos," said Hamish Johnston, editor of the magazine's online portal, physicsworld.com. He added that the judges of the 2013 award were also impressed by overcoming the challenges of building and operating a huge and extremely sensitive detector in the most remote and inhospitable place on Earth.

Astronomers working on the 10-meter South Pole Telescope were also part of the top ten list of breakthroughs for being the first to detect twisting patterns in the polarization of the cosmic microwave background--light that last interacted with matter very early in the history of the universe, less than 400,000 years after the big bang. These patterns, known as "B-modes," are caused by gravitational lensing, a phenomenon that occurs when the trajectory of light is bent by massive objects, much like a lens focuses light.

A collaboration of researchers led by John Carlstrom, the S. Chandrasekhar Distinguished Service Professor in Astronomy and Astrophysics at the University of Chicago, made the discovery. They announced their findings in a paper published in the journal Physical Review Letters--using the first data from SPTpol, a polarization-sensitive camera installed on the telescope in January 2012.

"The detection of B-mode polarization by South Pole Telescope is a major milestone, a technical achievement that indicates exciting physics to come," Carlstrom said at the time the discovery was announced.

To tease out the B-modes in their data, the scientists used a previously measured map of the distribution of mass in the universe to determine where the gravitational lensing should occur. The scientists are currently working with another year of data to further refine their measurement of B modes. The B-mode patterns can be used to map out the distribution of mass, thereby more accurately defining cosmologically important properties like the masses of neutrinos, tiny elementary particles prevalent throughout the cosmos.

NSF's Division of Polar Programs has a presidential mandate to manage the U.S. Antarctic Program, through which it coordinates all U.S. research on the Southernmost continent and aboard ships in the Southern Ocean and provides all of the logistics needed to support that science.

NSF's Polar Programs, Physics, and Astronomical Sciences divisions continue to fund both the IceCube and South Pole Telescope projects to support the instruments' operation and maintenance as well as the research enabled through these instruments.

Recognition of researcher contributions from both projects was made public on Dec. 13 at a news conference in Britain. The IceCube and South Pole Telescope researchers were scheduled to participate in the press conference from the South Pole.