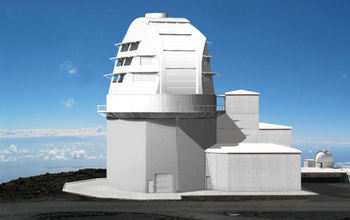 A rendering of the planned Daniel K. Inouye Solar Telescope.

The National Science Foundation (NSF) and the Association of Universities for Research in Astronomy (AURA) have renamed the Advanced Technology Solar Telescope under construction in Maui, Hawaii, the Daniel K. Inouye Solar Telescope. The name memorializes the late senator's profound commitment to fundamental scientific research and discovery, particularly in astronomy.

When completed in 2019, the Inouye telescope will be the world's premier ground-based solar observatory--more powerful than any other in the world. Armed with this new instrument, astronomers will be equipped to glean new insights into solar phenomena and discover new information about how our nearest star works, and for protecting the nation's vital space-based assets, the power grid and communication and weather satellites.

The four-meter aperture of this instrument being constructed on Haleakalâ is unprecedented for a solar telescope. It will be able to provide incomparable data that allow researchers to see more clearly into the heart of sunspots, flares and other manifestations of solar activity. It will be the premier ground-based platform where academics, industry, NASA centers and other national and international partners can collaborate to answer challenging questions of global impact. Befitting the legacy of Senator Inouye, the telescope will be pivotal in training the next generation of solar physicists and instrument builders as it hosts undergraduate and graduate opportunities and imparts curriculum development for local schools.

"Over five decades of national public service, Senator Inouye was a strong proponent of American science and innovation," said NSF Acting Director Cora Marrett. "This remarkable facility in his beloved state of Hawaii will expand our knowledge and advance our nation's scientific leadership over many decades to come."

"The Senator's enthusiastic support for our nation's science and technology enterprise was unwavering," said William Smith, AURA president. "AURA is confident that the facility that will bear his name will result in scientific discoveries that will vastly expand our knowledge of the sun and its interactions with earth and our atmosphere."

AURA, which operates the National Solar Observatory on the site of the University of Hawaii's Haleakalâ Observatory, is building and will operate this NSF-owned, state-of-the-art instrument. The Inouye telescope is located on the summit of Haleakalâ, an important site sacred to Native Hawaiian people. The use of this site, in consultation with the Native Hawaiian Working Group, is gratefully acknowledged.