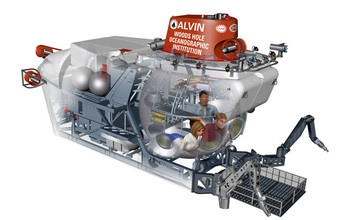 After a three-year overhaul and major upgrade, the United States' deepest-diving research submersible, Alvin, has been cleared to return to work exploring the ocean's depths.

The sub has been out of service since December 2010, undergoing a major upgrade, including the replacement of its personnel sphere with a newly fabricated, larger, more capable hull.

On Jan. 8, 2014, the Naval Sea Systems Command's (NAVSEA) Executive Director of Undersea Warfare for the Department of the Navy Steven Schulze certified that the sub could safely operate to depths of 3,800 meters, with the expectation that a certification dive to 4,500 meters will be completed later this year.

"There has been tremendous coordination between the Navy, Woods Hole Oceanographic Institution and the National Science Foundation (NSF) to ensure Alvin's safety and integrity," said the Navy's Director of Advanced Undersea Integration Don Hoffer. "Alvin is a national asset and the Navy is pleased to be a part of the team that returned the vehicle to service."

"Achieving Navy certification is a major milestone in the Alvin upgrade project, enabling the vehicle to get back to its critical mission of taking scientists to the deep sea," said WHOI Vice President for Marine Facilities and Operations Rob Munier.

"This significant accomplishment is a testament to the rigorous engineering collaboration between WHOI and NAVSEA and the unwavering support of NSF. Certification helps ensure that Alvin's excellent record of safety will continue for many decades to come."

Certification was the final step in Stage I of the Alvin upgrade project, funded by NSF and WHOI.

The project included upgrades to major components for an increased depth rating of 6,500 meters, including installation of a new, larger personnel sphere with improved interior ergonomics; five viewports (instead of the previous three) to improve visibility and provide overlapping fields of view; new lighting and high-definition imaging systems; new syntactic foam for buoyancy and an improved command-and-control system.

"The successful partnership between NSF, Navy and WHOI ensures that researchers will continue to have direct access to the deep ocean for the next generation of scientists and scientific challenges," said Bob Houtman, section head in NSF's Division of Ocean Sciences.

"The re-design of the existing vehicle was only possible thanks to the experience and expertise of the Alvin team, whose members worked closely with NAVSEA to meet the rigorous demands of naval safety standards."

Alvin will be put into service in mid-March for a "science verification" cruise led by Peter Girguis of Harvard University, who is chair of the University National Oceanographic Laboratory System's Deep Submergence Science Committee, tasked with oversight of the National Deep Submergence Facility.

Girguis, along with a team of scientists from across the United States, will test the various data acquisition and sampling systems in and around a combination of cold seep and deep-water coral sites in the Northern Gulf of Mexico, between New Orleans and Gulfport, Miss.

The scientists onboard will provide the research community with their written descriptions and assessments of the sub's performance.

Following that expedition, Alvin is scheduled to conduct three research expeditions in the Gulf of Mexico, examining the impacts of the Deepwater Horizon oil spill, determining the effects of ocean acidification on deep-water corals and studying deep water seeps.

During the second half of 2014, Alvin will be on the U.S. West Coast for dives on Juan De Fuca Ridge and later at the East Pacific Rise and Dorado Outcrop off Costa Rica.

Last November, the Alvin operations team, along with observers from the U.S. Navy, conducted certification dives off San Diego, where the sub was taken to progressively greater depths to prove that all its systems are safe for operation.

"The modifications made to Alvin during this upgrade and overhaul have exponentially improved its capabilities," said Pat Hickey, Alvin manager and one of the chief test pilots.

"The new LED lights save power while illuminating a far greater area than before, and the bigger and repositioned windows improve visibility. By repositioning the manipulators, we increased our work area, and the larger science basket allows us to load up to 400 pounds of exterior equipment and samples. An additional lateral thruster now allows the sub to hover like an underwater helicopter."

While Alvin is capable of operating at depths of 4,500 meters, time and location constraints during the certification trials prohibited dives to those depths.

Later this year, WHOI, NSF and the U.S. Office of Naval Research will schedule a dive to 4,500 meters to achieve the maximum certified depth of 4,500 meters for Stage I. The current Alvin certification depth supports all planned science activities in 2014.

Stage II of the upgrade is dependent on funding and improvements to lithium-ion battery technology. That stage will bring the remaining systems (battery, variable ballast and hydraulics) to the 6,500-meter capability, and the sub will then be certified to that depth.

This year marks Alvin's 50th year in operation. Commissioned in 1964 as one of the world's first deep-ocean submersibles, Alvin has made more than 4,600 dives.

The sub has undergone many upgrades over the years, including replacement of its steel personnel sphere in 1973 with one made of titanium, enabling access to a greater percentage of the seafloor.

The sub's most famous exploits include locating a lost hydrogen bomb in the Mediterranean Sea in 1966, exploring the first known hydrothermal vent sites in the 1970s and surveying the wreck of RMS Titanic in 1986.

In addition, the sub has enabled dozens of new discoveries in deep-sea geology, chemistry and biology.