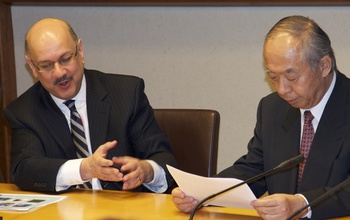 U.S. and Japanese officials announce first round of joint awards for next-generation networking.

Officials from the U.S. National Science Foundation (NSF) and the Japan National Institute of Information and Communications Technology (NICT) met in Arlington, Va., last month to announce the first round of awards provided through the Japan-U.S. Network Opportunity (JUNO) program.

The seven awards aim to explore fundamental aspects of next-generation computer networks, investigating how to scale these networks to support trillions of network-connected devices and objects. The awards follow a memorandum of understanding signed in May 2013 by leaders of the two organizations.

Experts anticipate that, in the coming years, more and more devices will connect to global information technology networks resulting from a proliferation of digital devices such as smartphones and tablets, as well as a growth in Internet-connected home appliances, residential and environmental sensors and vehicles. Cumulatively, these devices will constitute an "Internet of things" through which individuals and machines will communicate at a broader scale than ever before, leading to greater productivity, more functionality and potential job creation.

"We need novel approaches to sustain the scale and complexity of networks for the explosive growth in the mobile Internet, in cloud technologies and in the Internet of Things," said Farnam Jahanian, NSF's head of Computer and Information Science and Engineering. "We are thrilled to build upon our previous work with NICT, supporting collaborations between top researchers in the U.S. and Japan, who aim to lay the foundations for future global networks."

The JUNO awards support mutually-beneficial, international collaborations in the areas of optical networking, mobile computing, and network design and modeling. NSF is funding the U.S. researchers involved in the projects, and NICT is supporting the Japanese researchers. Each NSF award is on the order of $300,000 and spans up to three years.

"I think that Information and Communications Technology is entering a new paradigm as we connect the physical and virtual worlds, and New Generation Networks/Future Internet is critical to enabling this new paradigm," said Masao Sakauchi, president of NICT. "I am very excited about this Japan-U.S. joint research program, and I hope this program will be beneficial for both the Japan and U.S. research communities."

The underlying goal of JUNO is to address issues that arise when trillions of devices are network-connected, as is expected to be the case by the year 2020. The growth of connected devices will require novel approaches for network design and modeling, new technologies for network management, and flexible networks with the speed, capacity and environmental characteristics to accommodate communications among objects in the emerging world. The creation of the underlying fabric and protocols for such a network is of concern to both the U.S. and Japan.

The JUNO program extends research funded by NSF that seeks to develop the foundations of next-generation networking, including the Global Environment for Networking Innovation project, a virtual laboratory for at-scale networking experimentation, and the Networking Technology and Systems program, supporting transformative research on fundamental scientific and technological advances leading to the development of future-generation, high-performance networks and future Internet architectures.

Among the projects funded by JUNO are efforts to use dense wavelength division multiplexing to accommodate multiple wavelengths of optical paths within a fiber as well as initiatives to accelerate the adaptation of the network to changing needs by dynamically adjusting the optical link capacities between internet protocol routers based on network resource utilization and application quality of service requirements.

"JUNO brings together researchers on the leading edge of technology to create a flexible, dynamic optical highway, and other architectures necessary to efficiently sustain the global IT network of 2020, when trillions of electronic devices are expected to be connected to the Internet," said Andrea Fumagalli, a professor of electrical engineering at the University of Texas at Dallas, principal investigator of the JUNO-funded ACTION project and co-creator of digital subcarrier division multiplexing flexible grid technology. "This endeavor is of global importance, and I look forward to working with other innovators as we create a legacy for the future."