White House Champions of Change include educators supported by NSF 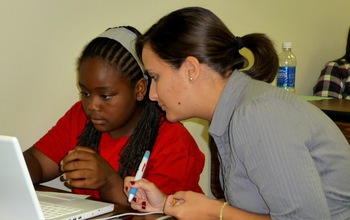 Kimberly A. Scott and Kevin Clark are among 10 educators and innovators being named STEM Access Champions of Change at the White House during an event on Feb. 26 to honor individuals working to support and accelerate STEM (science, technology, engineering and math) opportunities for African American students, schools and communities. The event will be live-streamed.

"Being named a STEM Access Champion of Change is not only a distinct honor, but also an acknowledgement of the need to teach girls technological skills in an engaging and transformative way," Scott said. "Bringing girls from underserved communities into the digital world ultimately will add intellectual diversity and talent to our country's workforce."

Clark is director of the Center for Digital Media Innovation and Diversity and professor in the College of Education and Human Development at George Mason University. He is being honored for his innovative approach to creating diversity and access in STEM fields.

"I am truly humbled and appreciative to receive this award," said Clark, who will be joined at the White House by his wife, son, and daughter as well as doctoral student Asia Williams and her husband.

Scott saw the need for a program to teach girls advanced technological skills in 2007 when she started CompuGirls and only 10 percent of middle-school girls rated the computer science profession as a "very good" choice for them, according to NSF data.

A 2012 study by the National Center for Women and Information Technology reported that African American and Hispanic women represent only 3 percent and 1 percent of the United States computing workforce. Native American women majoring in computer and information sciences represent less than 1 percent.

Part of the issue is that girls see programming or other technology careers as culturally irrelevant, not as a tool to reach their goals, Scott said. When they are engaged in social justice issues that are important to them, girls learn the technology as a means to build their projects. Girls use technology as a tool through the program to address complex issues such as child abuse, indigenous language and culture loss, and gentrification. Starting as eighth graders, girls who participate are from underserved school districts and are predominantly Hispanic, African American and Native American.

Scott originally developed CompuGirls with support from the Arizona Community Foundation. Recently, the National Science Foundation awarded multiple large grants to bring the program to girls in school districts in the Phoenix-metro area, including at the Gila River Boys and Girls Club in Sacaton and Komatke, Ariz., part of the Gila River Indian Community. The program has since expanded to Colorado.

Clark's recent activities have focused on the use of video game design to increase interest in STEM careers; examining pathways and best practices for increasing diversity in STEM disciplines; and issues of diversity in the design and development of educational media products. In addition to his scholarly activities, Clark has extensive experience as a designer and consultant in the areas of educational video game design, online and interactive media, and issues of diversity and inclusion in children's media. He received an NSF grant in 2007 for a project titled, Game Design Through Mentoring and Collaboration.

The two educators work together as co-leaders of STEM For All, also funded by NSF, a project that brings together a diverse group of researchers, practitioners, funding organizations and policy analysts to work on developing a forum where an interdisciplinary team shares knowledge and devises agendas and action items that lead to broadening understanding and pragmatic solutions for traditionally underserved students to enter and persist in STEM fields.