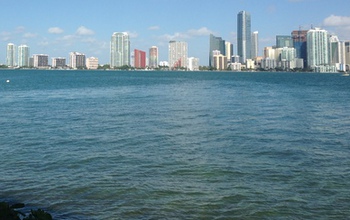 The skyline of downtown Miami along Biscayne Bay: What will it look like in 20, 50, 100 years?

Miami could know as early as 2020 how high sea levels will rise into the next century, according to a team of researchers including Florida International University scientist Rene Price.

Price is also affiliated with the National Science Foundation's (NSF) Florida Coastal Everglades Long-Term Ecological Research (LTER) site, one of 25 such NSF LTER sites in ecosystems from coral reefs to deserts, mountains to salt marshes around the world.

Scientists conclude that sea level rise is one of the most certain consequences of climate change.

But the speed and long-term height of that rise are unknown. Some researchers believe that sea level rise is accelerating, some suggest the rate is holding steady, while others say it's decelerating.

With long-term data showing that global sea levels are steadily rising at 2.8 millimeters per year, and climate models indicating that the rate could accelerate over time, Price posed a question to colleagues: How soon will Miami residents know what sea levels will be in the year 2100?

"In Miami, we're at the forefront of sea level rise," Price says. "With the uncertainty in what we currently know, I was looking for information that could help us plan better for the long-term."

Price and a team of international researchers set out to answer the question.

They analyzed data from 10 sea level monitoring stations throughout the world.

They looked into the future by analyzing the past.

The researchers examined historical data to identify the timing at which accelerations might first be recognized in a significant manner and extended projections through 2100.

The findings are published in this week's issue of the journal Nature Communications.

"Being able to detect and predict the pace of sea level rise is critical to being able to adapt to future changes in coastal regions," says Garrison.

Price says the information provided should offer some comfort to those living with this uncertainty.

"Our results show that by 2020 to 2030, we could have some statistical certainty of what the sea level rise situation will look like," she says.

"That means we'll know what to expect and have 70 years to plan. In a subject that has so much uncertainty, this gives us the gift of long-term planning."

Conservative projections suggest that sea level could rise by .3 meters by 2100, but with acceleration, some scientists believe that number will be closer to 1 meter.

"The Everglades and mangroves may not be able to keep up. Mangroves are very important to South Florida, and their loss would likely mean more land erosion.

"We could see large portions of the Everglades taken over by the ocean. Areas that are freshwater today could become saltwater by 2100."

As cities, including Miami, continue to plan for long-term solutions to sea level rise, Price says she was surprised to discover that in the span of 20 years, scientists would be in a position to predict the long-term situation for Miami and other coastal areas across the planet.