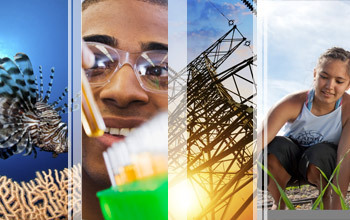 The girl in the image on the far right is a participant in Idaho EPSCoR's HOIST program.

Investing in basic research in science and engineering yields positive economic benefits for America and for the state or region that hosts each project. This is the underlying value of the National Science Foundation's (NSF) Experimental Program to Stimulate Competitive Research, known as EPSCoR. NSF EPSCoR promotes strategic investments in science and engineering programs that build research and development capacity in 31 states and jurisdictions. EPSCoR projects enhance scientific discovery, strengthen research infrastructure and spur technological innovations that drive economic growth. These projects support NSF's strategic goal, seeking to ensure that the U.S. remains at the forefront of transformative research and development.

Media are invited to attend a briefing that will spotlight programs in four EPSCoR jurisdictions: Idaho, Arkansas, South Dakota and the Virgin Islands.

A diversity of research programs in these areas not only bolsters each region's economic health and vitality, but also builds capacity for research and development in the U.S.

Paul L. Hill has served as chancellor of the West Virginia Higher Education Policy Commission since May of 2012, prior to which he served as the system's interim chancellor and as vice chancellor for science and research. Hill has more than 25 years of experience in academic research, grant administration and public policy development and has held CEO positions in state, federal and private organizations. As executive director of West Virginia EPSCoR, he helped design and manage a number of research initiatives with academic institutions including the West Virginia Research Trust Fund, known as "Bucks for Brains."

Peter Goodwin serves as the Idaho EPSCoR Project Director. He is the DeVlieg Professor of Civil Engineering and director of the Center for Ecohydraulics Research at the University of Idaho. His research involves systems approaches to ecological restoration of river, wetland and estuarine systems and creating simulation models for flood management, sediment management, geomorphic evolution and environmental management. He serves as scientific advisor for several government agencies related to river and wetland management, was lead scientist at the California Bay-Delta Science Program and past-chair of the Louisiana Coastal Area Science Board.

James A. Rice serves as the South Dakota EPSCoR Project Director. He also serves as professor and head of the Department of Chemistry and Biochemistry at South Dakota State University. In these roles, he has been project director and principal investigator on national competitive research grants totaling more than $47 million in research interests such as solid-state nuclear magnetic resonance, small-angle scattering and the application of these techniques in environmental chemistry and geochemistry.