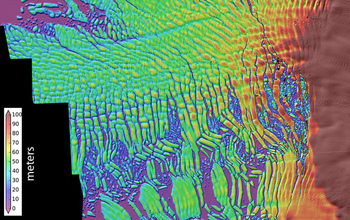 A high-resolution map of the Thwaites Glacier's thinning ice shelf.

National Science Foundation- (NSF) funded researchers at the University of Washington have concluded that Antarctica's fast-moving Thwaites Glacier will likely disappear in a matter of centuries, potentially raising sea level by more than a half-a-meter (two feet).

The glacier acts as an ice dam, stabilizing and regulating movement toward the sea of the massive West Antarctic Ice Sheet. The ice sheet contains enough ice to cause another 3 to 4 meters (10 to 13 feet) of global sea level rise.

"There's been a lot of speculation about the stability of marine ice sheets, and many scientists suspected that this kind of behavior is under way," said Ian Joughin, a glaciologist at the university's Applied Physics Laboratory (APL) and the first author on the paper. " This study provides a more quantitative idea of the rates at which the [ice sheet] collapse could take place."

While the word "collapse" implies a sudden change, the fastest scenario based on the data, the researchers said, is 200 years, and the longest is more than 1,000 years.

The findings are published in the May 16 edition of the journal Science.

The new discovery is among a series of significant findings that derive from research funded by NSF during the International Polar Year (IPY) 2007-2009, during which scientists from more than 60 nations focused their efforts on research in the Arctic and Antarctic. NSF was the lead U.S. agency for the IPY

The research was funded by two NSF grants: one awarded to the Center for the Remote Sensing of Ice Sheets (CReSIS) at the University of Kansas; the other, a collaborative IPY grant, Constraining the Mass-Balance Deficit of the Amundsen Coast's Glaciers, to Joughin and his colleagues.

The new study used airborne radar, developed by CReSIS to peer down through the thick ice and map the topography of the underlying bedrock. The shape of the underlying bedrock controls the ice sheet's long-term stability. The mapping was done as part of NASA's Operation IceBridge, a series of overflights of the ice by a P-3 research aircraft, and included other instruments to measure the height of the ice sheet's rapidly thinning surface. In some places Thwaites Glacier has been losing tens of feet, or several meters, of elevation per year.

While the timescales for a collapse of the ice sheet are in question, such a collapse may be inevitable, the researchers said.

"Previously, when we saw thinning we didn't necessarily know whether the glacier could slow down later, spontaneously or through some feedback," Joughin said. "In our model simulations it looks like all the feedbacks tend to point toward it actually accelerating over time; there's no real stabilizing mechanism we can see."

Earlier warnings of collapse had been based on a simplified model of ice sitting in an inward-sloping basin. The topography around Antarctica, however, is complex.

The researchers combined the IceBridge and CReSIS data with their own satellite measurements of ice-surface speeds. Their computer model was able to reproduce the glacier's ice loss during the past 18 years, and they ran the model forward under different amounts of ocean-driven melting.

The place where the glacier meets land, the grounding line, now sits on a shallow ridge at a depth of about 600 meters (2,000 feet) below asea level. Results show that as the ice edge retreats into the deeper part of the bay, the ice face will become steeper and, like a towering pile of sand, the fluid glacier will become less stable and collapse out toward the sea.

"Once it really gets past this shallow part, it's going to start to lose ice very rapidly," Joughin said.

The study considered future scenarios using faster or slower melt rates depending on the amount of future warming. The fastest melt rate led to the early stages lasting 200 years, after which the rapid-stage collapse began. The slowest melt rate kept most of the ice for more than a millennium before the onset of rapid collapse. The most likely scenarios may be between 200 and 500 years, Joughin said.

"All of our simulations show it will retreat at less than a millimeter of sea level rise per year for a couple of hundred years, and then, boom, it just starts to really go," Joughin said.

Researchers did not model the more chaotic rapid collapse, but the remaining ice is expected to disappear within a few decades.