Enough with the lecturing 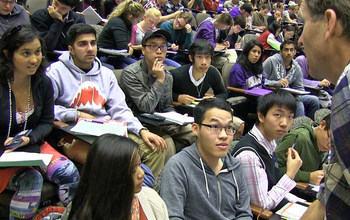 Attempts by college faculty to use active learning started taking off in the mid-1990s.

A significantly greater number of students fail science, engineering and math courses that are taught lecture-style than fail in classes incorporating so-called active learning that expects them to participate in discussions and problem-solving beyond what they've memorized.

Active learning also improves exam performance in some cases enough to change grades by half a letter or more--so a B-plus, for example, becomes an A-minus.

Those findings are from the largest and most comprehensive analysis ever published of studies comparing lecturing to active learning in undergraduate education, said Scott Freeman, a University of Washington principal lecturer in biology. He's lead author of a paper in the Proceedings of the National Academy of Sciences the week of May 12.

Freeman and his co-authors based their findings on 225 studies of undergraduate education across all of the "STEM" areas: science, technology, engineering and mathematics. Many of the studies analyzed were funded by the National Science Foundation (NSF).

The researchers found that 55 percent more students fail lecture-based courses than classes with at least some active learning. Two previous studies looked only at subsets of the STEM areas and none before considered failure rates.

"If you have a course with 100 students signed up, about 34 fail if they get lectured to but only 22 fail if they do active learning, according to our analysis," Freeman said. "There are hundreds of thousands of students taking STEM courses in U.S. colleges every year, so we're talking about tens of thousands of students who could stay in STEM majors instead of flunking out every year."

This could go a long way toward meeting national calls like the one from the President's Council of Advisors on Science and Technology (PCAST) saying the U.S. needs a million more STEM majors in the future, Freeman said.

"Freeman's study reinforces the conclusion of PCAST [President's Council of Advisors on Science and Technology] that widespread implementation of these evidence-based practices will increase retention and persistence in STEM fields and further supports the findings of the National Research Council's Discipline-based Education Research report, funded by NSF," said Susan Singer who leads NSF's Division of Undergraduate Education.

It is encouraging news as NSF convenes an interagency team to implement the undergraduate goals of the Federal STEM Education 5-year Strategic Plan. One of the four goals is to "Identify and broaden implementation of evidence-based instructional practices and innovations to improve undergraduate learning and retention in STEM and develop national architecture to improve empirical understanding of how these changes relate to key student outcomes."

Attempts by college faculty to use active learning, long popular in K-12 classrooms, started taking off in the mid-1990s, Freeman said, though lecturing still dominates.

"We've got to stop killing student performance and interest in science by lecturing and instead help them think like scientists," he said.

For the paper, more than 640 studies comparing traditional lecturing with some kind of active learning were examined by Freeman, Wenderoth and their other co-authors, Sarah Eddy, Miles McDonough, Nnadozie Okoroafor and Hannah Jordt, all with the UW biology department, and Michelle Smith with the University of Maine, whose research was funded by NSF. The studies, conducted at four-year and community colleges mainly in the U.S., appeared in STEM education journals, databases, dissertations and conference proceedings.

Some 225 of those studies met the standards to be included in the analysis including: assurances the groups of students being compared were equally qualified and able, instructors or groups of instructors were the same, and exams given to measure performance were either exactly alike or used questions pulled from the same pool of questions each time.

The data were considered using meta-analysis, an approach long used in fields such as biomedicine to determine the effectiveness of a treatment based on studies with a variety of patient groups, providers and ways of administering the therapy or drugs.

Regarding grade improvement, the findings showed improvements on exams increased an average of 6 percent, which might raise students half a grade, for example from a B+ to an A-.

"That 840,000 students is a large portion of the million additional STEM majors the president's council called for," Freeman said.