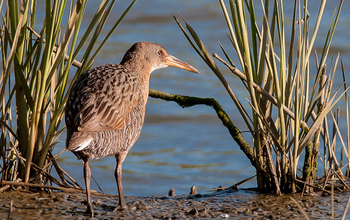 What should resource managers do when the eradication of an invasive species threatens an endangered one?

In results of a study published this week in the journal Science, researchers at the University of California, Davis, examine one such conundrum now taking place in San Francisco Bay.

The study was led by UC Davis researcher Adam Lampert.

"The project exemplifies the goals of the CNH program," says Tessier, "which are to advance the understanding of complex systems involving humans and nature."

Its native habitat has slowly vanished over recent decades, largely due to urban development and invasion by Spartina.

Study results show that, rather than moving as fast as possible with eradication and restoration plans, the best approach is to slow down the eradication of the invasive species until restoration or natural recovery of the system provides appropriate habitat for the endangered species.

"The whole management system needs to take longer, and you need to have much more flexibility in the timing of budget expenditures over a longer time-frame."

The scientists combined biological and economic data on Spartina and on the Clapper Rail to develop a modeling framework to balance conflicting management goals, including endangered species recovery and invasive species restoration, given fiscal limitations.

While more threatened and endangered species are becoming dependent on invasive species for habitat and food, examples of the study's specific conflict are relatively rare--for now.

Another case where the eradication of an invasive species threatened to compromise the recovery of an endangered plant or animal is in the southwestern United States, where an effort to eradicate Tamarisk was cancelled because the invasive tree provides nesting habitat for the endangered Southwestern Willow Flycatcher.

"As eradication programs increase in number, we expect this will be a more common conflict in the future," said paper co-author and UC Davis scientist Ted Grosholz.

Other co-authors include scientists James Sanchirico of UC Davis and Sunny Jardine of the University of Delaware.