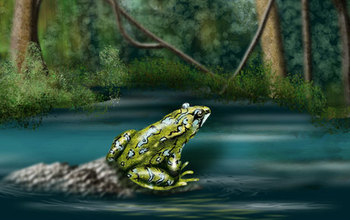 Amphibian populations have been devastated by the waterborne chytrid fungus, but there's new hope.

Now research results published this week in the journal Nature reveal that amphibians can acquire behavioral or immunological resistance to a deadly chytrid fungus implicated in global amphibian population declines.

"Acquired resistance is important because it is the basis of vaccination campaigns based on 'herd immunity,' where immunization of a subset of individuals protects all from a pathogen," said Jason Rohr, a biologist at the University of South Florida (USF) who led the research team along with Taegan McMahon of the University of Tampa.

Experiments in the study revealed that after just one exposure to the chytrid fungus, frogs learned to avoid the deadly pathogen.

"The discovery of immunological resistance to this pathogenic fungus is an exciting fundamental breakthrough that offers hope and a critical tool for dealing with the global epidemic affecting wild amphibian populations," said Liz Blood, a program officer in the National Science Foundation's Directorate for Biological Sciences, which funded the research through its MacroSystems Biology Program.

In further experiments in which frogs could not avoid the fungus, frog immune responses improved with each fungal exposure and infection clearance, significantly reducing fungal growth and increasing the likelihood that the frogs would survive subsequent chytrid infections.

"The amphibian chytrid fungus suppresses the immune responses of amphibian hosts, so many researchers doubted that amphibians could acquire effective immunity against this pathogen," Rohr said.

"However, our results suggest that amphibians can acquire immunological resistance that overcomes chytrid-induced immunosuppression and increases survival."

Rohr also noted that "variation in the degree of acquired resistance might partly explain why fungal pathogens cause extinctions of some animal populations but not others."

Conservationists have collected hundreds of amphibian species threatened by the fungus and are maintaining them in captivity with the hope of re-establishing them in the wild.

But reintroduction efforts so far have failed because of the persistence of the fungus at collection sites.

"An exciting result from our research is that amphibian exposure to dead chytrid induced a similar magnitude of acquired resistance as exposure to the live fungus," McMahon said.

Immune responses to fungi are similar across vertebrates, and many animals are capable of learning to avoid natural enemies, Rohr said.

"Our findings offer hope that amphibians and other wild animals threatened by fungal pathogens--such as bats, bees and snakes--might be capable of acquiring resistance to fungi and so might be rescued by management approaches based on herd immunity."

Rohr cautioned, however, that "although this approach is promising, more research is needed to determine the success of this strategy."