Coordinated timing may have implications for ocean food web 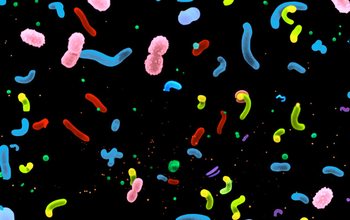 Imagine the open ocean as a microbial megacity, teeming with life too small to be seen.

In every drop of water, hundreds of types of bacteria can be found.

Now scientists have discovered that communities of these ocean microbes have their own daily cycles--not unlike the residents of a bustling city who tend to wake up, commute, work and eat at the same times.

Light-loving photoautotrophs--bacteria that need solar energy to help them photosynthesize food from inorganic substances--have been known to sun themselves on a regular schedule.

The switches suggest a wave of activity that passes through the microbial community.

"I like to say that they are singing in harmony," said Edward DeLong, a biological oceanographer at the University of Hawaii at Manoa and an author of this week's paper.

"For any given species, the gene transcripts for specific metabolic pathways turn on at the same time each day."

The observations were made possible by advanced microbial community RNA sequencing techniques, which allow for whole-genome profiling of multiple species at once.

Riding the same ocean currents as the microbes it follows, the ESP is equipped to harvest the samples needed for this high-frequency, time-resolved analysis of microbial community dynamics.

What the scientists saw was intriguing: different species of bacteria expressing different types of genes in varying, but consistent, cycles--turning on, for example, restorative genes needed to rebuild solar-collecting powers at night, then ramping up with different gene activity to build new proteins during the day.

"It was almost like a shift of hourly workers punching in and out on a clock," DeLong said.

"It was accomplished by combining new instrumentation for remote sampling with state-of-the-art molecular biological techniques."

The coordinated timing of gene firing across different species of ocean microbes could have important implications for energy transformation in the sea.

"For decades, microbiologists have suspected that marine bacteria were actively responding to day-night cycles," said Mike Sieracki, a program director in NSF's Directorate for Geosciences.

"These researchers have shown that ocean bacteria are indeed very active and likely are synchronized with the sun."

The mechanisms that regulate this periodicity remain to be determined.

Can you set your watch by them?

DeLong said that you can, but it matters whether you're tracking the bacteria in the lab or at sea.

For example, maximum light levels at Station ALOHA are different than light conditions in experimental settings in the laboratory, which may have an effect on microbes' activity and daily cycles.

"That's part of why it's so important to conduct this research in the open ocean environment," said DeLong.

"There are some fundamental laws to be learned about how organisms interact to make the system work better as a whole and to be more efficient."

The research also was funded by the Gordon and Betty Moore Foundation.