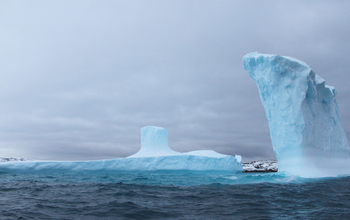 Icebergs in the Southern Ocean near NSF's Palmer Station

Scientists from 11 institutions across the United States will meet this week at Princeton University to officially launch a $21-million, National Science Foundation (NSF)-funded, interdisciplinary initiative to study the Southern Ocean, the sea that surrounds Antarctica.

The Southern Ocean is thought to account for 30 percent of the world's ocean area and absorbs half of the human-produced carbon dioxide in the atmosphere.

The Southern Ocean Carbon and Climate Observations and Modeling program, or SOCCOM, is a six-year initiative headquartered at Princeton. In addition to NSF, NASA and the National Oceanic and Atmospheric Administration (NOAA) also are contributing to SOCCOM.

"SOCCOM will enable top scientists from institutions around the country to work together on Southern Ocean research in ways that would not otherwise be possible," said SOCCOM director Jorge Sarmiento, Princeton's George J. Magee Professor of Geoscience and Geological Engineering and director of the Program in Atmospheric and Oceanic Sciences.

"The scarcity of observations in the Southern Ocean and inadequacy of earlier models, combined with its importance to the Earth's carbon and climate systems, means there is tremendous potential for groundbreaking research in this region," Sarmiento said.

Through its Division of Polar Programs, NSF manages the U.S. Antarctic Program, which coordinates all federal research on the southernmost continent and in the surrounding waters.

"Continuously encircling the Antarctic continent, the Southern Ocean, connected to the atmosphere of the entire southern hemisphere, represents the Earth as a predominantly aquatic planet," said Peter Milne, Polar Programs' Ocean and Atmospheric Sciences Program director. "In many respects simpler, this representation still underlies how much remains to be understood of how our climate works."

SOCCOM will create a biogeochemical and physical portrait of the ocean by deploying roughly 200 floats outfitted with sensors that will provide almost continuous information related to the ocean's carbon, nutrient (nitrates, in particular) and oxygen content, both at and deep beneath the surface.

The floats are augmented biogeochemical versions of the nearly 4,000 Argo floats deployed worldwide to measure ocean salinity and temperature. They will be constructed at the University of Washington with sensors from the Monterey Bay Aquarium Research Institute; NOAA's Climate Program Office will provide half of the basic Argo floats.

Float deployment, observation analysis and data assimilation will be led by the Scripps Institution of Oceanography at the University of California, San Diego. Researchers from Oregon State University and NOAA will develop the floats' carbon algorithms. In addition, NASA will support a complementary project involving researchers at the University of Maine and Rutgers University that will equip the floats with bio-optical sensors intended to gather data about biological processes in the water column.

SOCCOM marks the first large-scale deployment of these biogeochemical floats.

"These floats are revolutionary and this major new observational initiative will give us unprecedented year-round coverage of biogeochemistry in the Southern Ocean," Sarmiento said.

SOCCOM will provide direct observations to further understand the importance of the Southern Ocean as suggested by models and ocean studies. Aside from carbon and heat uptake, models have indicated that the Southern Ocean delivers nutrients to lower-latitude surface waters that are critical to ocean ecosystems around the world. In addition, the impacts of ocean acidification as levels of carbon dioxide in atmosphere increase are projected to be most severe in the Southern Ocean.

The floats are expected to increase by 10 to 30 times the monthly data currently coming out of the Southern Ocean, Sarmiento said. That data will be used to improve recently developed high-resolution, Earth-system models that will allow for a better understanding of the Southern Ocean and for better projections of Earth's climate and biogeochemical trajectory.

In addition to administering the project, Sarmiento and other Princeton researchers will co-lead the modeling and broader impacts components, as well as coordinated data management. Researchers from NOAA's Geophysical Fluid Dynamics Laboratory housed on Princeton's Forrestal Campus will carry out high-resolution, Earth-system simulations in support of the modeling effort, which is led by the University of Arizona and includes collaborators from the University of Miami.

Climate Central, a non-profit science and journalism organization based in Princeton, will oversee the broader-impacts component.

In keeping with SOCCOM's knowledge sharing, or "broader impacts," component, all the information collected will be freely available to the public, other researchers and industry.