Cause of California drought linked to climate change 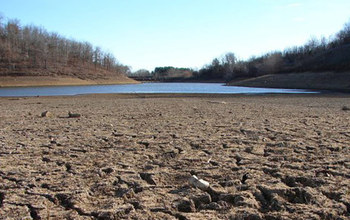 The drought crippling California is by some measures the worst in the state's history.

The atmospheric conditions associated with the unprecedented drought in California are very likely linked to human-caused climate change, researchers report.

Climate scientist Noah Diffenbaugh of Stanford University and colleagues used a novel combination of computer simulations and statistical techniques to show that a persistent region of high atmospheric pressure over the Pacific Ocean--one that diverted storms away from California--was much more likely to form in the presence of modern greenhouse gas concentrations.

The result, published today as part of a series of papers in the Bulletin of the American Meteorological Society, is one of the most comprehensive studies to investigate the link between climate change and California's ongoing drought.

"Our research finds that extreme atmospheric high pressure in this region--which is strongly linked to unusually low precipitation in California--is much more likely to occur today than prior to the emission of greenhouse gases that began during the Industrial Revolution in the 1800s," says Diffenbaugh.

The exceptional drought crippling California is by some measures the worst in state history.

Combined with unusually warm temperatures and stagnant air conditions, the lack of precipitation has triggered a dangerous increase in wildfires and incidents of air pollution across the state.

The water shortage could result in direct and indirect agricultural losses of at least $2.2 billion and lead to the loss of more than 17,000 seasonal and part-time jobs in 2014 alone.

Such effects have prompted a drought emergency in the state; the federal government has designated all 58 California counties as natural disaster areas.

"In the face of severe drought, decision-makers are facing tough choices about the allocation of water resources for urban, agricultural and other crucial needs," says Anjuli Bamzai, program director in the National Science Foundation's (NSF) Division of Atmospheric and Geospace Sciences, which funded the research.

"This study places the current drought in historical perspective and provides valuable scientific information for dealing with this grave situation. "

Scientists agree that the immediate cause of the drought is a particularly tenacious "blocking ridge" over the northeastern Pacific--popularly known as the Ridiculously Resilient Ridge, or "Triple R"--that prevented winter storms from reaching California during the 2013 and 2014 rainy seasons.

Blocking ridges are regions of high atmospheric pressure that disrupt typical wind patterns in the atmosphere.

"Winds respond to the spatial distribution of atmospheric pressure," says Daniel Swain of Stanford, lead author of the paper.

"We have seen this amazingly persistent region of high pressure over the northeastern Pacific for many months, which has substantially altered atmospheric flow and kept California largely dry."

The Triple R was exceptional for both its size and longevity.

While it dissipated briefly during the summer months of 2013, it returned by fall 2013 and persisted through much of the winter, California's wet season.

"At its peak in January 2014, the Triple R extended from the subtropical Pacific between California and Hawaii to the coast of the Arctic Ocean north of Alaska," says Swain, who coined the term "ridiculously resilient ridge" to highlight the persistent nature of the blocking ridge.

Like a large boulder that has tumbled into a narrow stream, the Triple R diverted the flow of high-speed air currents known as the jet stream far to the north, causing Pacific storms to bypass not only California, but also Oregon and Washington.

As a result, rain and snow that would normally fall on the West Coast were instead re-routed to Alaska and as far north as the Arctic Circle.

An important question for scientists and decision-makers has been whether human-caused climate change has influenced the conditions responsible for California's drought.

Given the important role of the Triple R, Diffenbaugh and colleagues set out to measure the probability of such extreme ridging events.

The team first assessed the rarity of the Triple R in the context of the 20th century historical record.

Analyzing the period since 1948, for which comprehensive atmospheric data are available, the researchers found that the persistence and intensity of the Triple R in 2013 were unrivaled by any previous event.

To more directly address the question of whether climate change played a role in the probability of the 2013 event, the team collaborated with scientist Bala Rajaratnam, also of Stanford.

One set mirrored the present climate, in which the atmosphere is growing increasingly warmer due to human emissions of carbon dioxide and other greenhouse gases.

In the other set of experiments, greenhouse gases were kept at a level similar to those that existed just prior to the Industrial Revolution.

The researchers found that the extreme heights of the Triple R in 2013 were at least three times as likely to occur in the present climate as in the preindustrial climate.

They also found that such extreme values are consistently tied to unusually low precipitation in California, and to the formation of atmospheric ridges over the northeastern Pacific.

"We've demonstrated with high statistical confidence that large-scale atmospheric conditions similar to those of the Triple R are far more likely to occur now than in the climate before we emitted large amounts of greenhouse gases," Rajaratnam says.

"In using these advanced statistical techniques to combine climate observations with model simulations, we've been able to better understand the ongoing drought in California," Diffenbaugh adds.

"This isn't a projection of 100 years in the future. This is an event that is more extreme than any in the observed record, and our research suggests that global warming is playing a role right now."