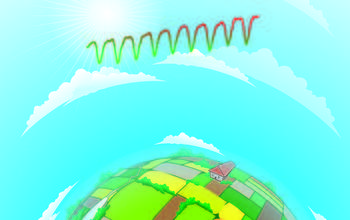 The agricultural "Green Revolution" has contributed to deeper breathing of Earth's atmosphere.

The intense farming practices of the "Green Revolution" are powerful enough to alter Earth's atmosphere at an ever-increasing rate, boosting the seasonal amplitude in atmospheric carbon dioxide to about 15 percent during the last five decades.

That's the key finding of a new atmospheric model that estimates that on average, the amplitude of the seasonal oscillation of carbon dioxide in the atmosphere is increasing at the rate of 0.3 percent every year.

A report on the results of the model, called VEGAS, is published today in the journal Nature.

"What we are seeing is the effect of the 'Green Revolution' on Earth's metabolism," says Ning Zeng, an atmospheric scientist at the University of Maryland and the lead developer of VEGAS, a terrestrial carbon cycle model that, for the first time, factors in changes in 20th and 21st century farming practices.

"Changes in the way we manage the land can literally alter the breathing of the biosphere."

Scientists have known since the 1950s that carbon dioxide levels in the atmosphere hit an annual low during late summer and early fall in the Northern Hemisphere, which has a greater continental landmass than the Southern Hemisphere and therefore has more plant life.

The atmosphere's carbon dioxide level falls in spring and summer as the hemisphere's plants reach their maximum growth, taking in carbon dioxide and releasing oxygen.

In the autumn, when the plants are decomposing and releasing stored carbon, the atmosphere's carbon dioxide levels rapidly increase.

"These results offer tantalizing insights on the role of land use cover change in modulating levels of atmospheric carbon dioxide," says Anjuli Bamzai, program director in the National Science Foundation's (NSF) Division of Atmospheric and Geospace Sciences, which funded the research.

"The findings indicate that changes in land management practices due to the 'Green Revolution' are the primary reason for an increase in the amplitude of the seasonal cycle of atmospheric carbon dioxide."

In a set of historic observations taken continuously since 1958 at Hawaii's Mauna Loa Observatory and later in other places such as Barrow, Alaska, researchers have tracked these seasonal peaks and valleys.

Between 1961 and 2010, the seasonal variation has become more extreme.

Carbon dioxide levels are currently about six parts per million higher in the Northern Hemisphere's winter than in summer.

While the forces driving the overall increase in carbon dioxide are well-understood, the reasons behind the steepening of the seasonal carbon dioxide cycle are harder to pin down, scientists say.

But even taken together, these factors cannot fully account for the trend and spatial patterns toward increasing seasonal change.

Zeng points out that between 1961 and 2010, the amount of land planted with major crops grew by 20 percent, but crop production tripled.

The combination of factors known as the "Green Revolution"--improved irrigation, increased use of manufactured fertilizer, and higher-yield strains of corn, wheat, rice and other crops--must have led not only to increased crop productivity, but also to increases in plants' seasonal growth and decay and the amount of carbon dioxide they release to the atmosphere, the scientists believe.

Researcher Fang Zhao of the University of Maryland and other collaborators worked with Zeng to add information on worldwide crop production.

To ensure that their results did not overstate the effect of the "Green Revolution," the scientists ran their model using an estimate of worldwide crop production slightly lower than the FAO statistics.

Once the "Green Revolution" was factored in, VEGAS' results generally tracked the actual carbon dioxide peaks and valleys recorded at Mauna Loa.

Between 1975 and 1985, carbon dioxide levels rose faster at Mauna Loa than they did in the model, but this could be due to regional weather patterns, Zeng says.

Other atmospheric models factor in changes in land use, from natural vegetation to cropland, Zeng says, but the VEGAS results are the first to track the effect of changes in the intensity of farming methods.

There are still many unknowns, however.

For example, the "Green Revolution" has not affected all parts of the world equally, and there isn't enough detailed information about changing farming practices over the past 50 years to build those detailed variations into the model.

"We dealt with the unknowns by keeping it simple," says Zeng. "Our goal was simply to represent the intensification of agriculture in a model of the carbon cycle, and we have accomplished that."

In addition to Zeng and Zhao, also involved in the research were University of Maryland scientists Eugenia Kalnay and Ross Salawitch.

In addition to NSF, the research was supported by the National Oceanic and Atmospheric Administration and NASA.