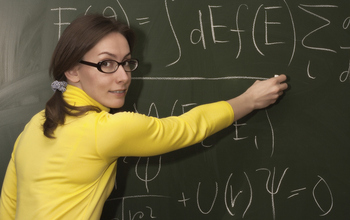 When academic communities send the message that raw brilliance, or a high level of innate intellectual aptitude, is required for success, these messages combine with cultural stereotypes to decrease that community's diversity.

That's what Sarah-Jane Leslie, a professor of philosophy at Princeton University, and Andrei Cimpian, a professor of psychology at the University of Illinois at Urbana-Champaign, want faculty to know from their newly published research on gender imbalance in STEM subjects--science, technology, engineering and mathematics.

In a paper published today in the journal Science, Leslie and co-lead investigator Cimpian conclude that women and minorities often are underrepresented in certain academic fields because of a mix of oversimplified, stereotyped images of brilliance and field-specific beliefs concerning performance expectations.

Women are not underrepresented in all STEM disciplines; and the problem is not unique to STEM fields. For example, women made up 54 percent of U.S. Ph.D.'s in molecular biology in 2011 compared to only 31 percent in philosophy.

Leslie and Cimpian became very interested in how performance beliefs held by people in academic fields were able to predict gender gaps across both STEM and humanities disciplines.

They derived a "field-specific ability beliefs hypothesis" and tested whether it could predict gender differences in academic disciplines. They based the hypothesis on prior research regarding stereotyping that shows children begin to believe people who share membership in an ethnic or gender group are similar to each other and are different from members of other groups.

For instance, children often think that if one girl dislikes math, other girls--but not boys--will dislike it too, or that if one member of an ethic group commits a crime, other members of the group may do so as well. Leslie and Cimpian generalized the concept to academia, arguing that when practitioners believe raw, innate talent is the main requirement for success and women are stereotyped as not possessing such talent, the field will be less welcoming to women. This ultimately leads to gender imbalance.

With support from the National Science Foundation's (NSF) Social, Behavioral and Economics Sciences Directorate, Leslie and Cimpian teamed up with Meredith Meyer from Otterbein University and Edward Freeland from the Princeton University Survey Research Center and surveyed faculty, postdoctoral fellows and graduate students in a large-scale, nationwide study of academics from 30 disciplines to evaluate the field-specific ability beliefs hypothesis, along with three competing hypotheses.

Leslie and Cimpian found that only the field-specific ability beliefs hypothesis, unlike the three competitors, is able to predict gender differences across all of academia, as well as differences for other similarly underrepresented groups, such as African Americans.

"We found academic fields that emphasized the need for raw brilliance were more likely to endorse the claim that women are less well suited than men to be top scholars in the field," says Cimpian, "and further that such fields are less welcoming to women."

"I was also surprised that none of the three alternative hypotheses was able to predict gender representation across both STEM and non-STEM disciplines," she says.

Leslie and Cimpian say practitioners, who wish to diversify their disciplines, should adjust the messages they send to students concerning what's required for success. The researchers contend practitioners might want to stay away from words like "brilliant," "genius" and "gifted" and instead emphasize to their students the importance of hard work and dedication.

However, "changing the messages to the students is only one part of it," says Leslie. "People who wish to increase diversity may need to work to change the culture of the entire field.

"We should share personal anecdotes--not just with our students, but also with our colleagues--about how we overcame challenges, set-backs and failures along the way. It can be tempting to present oneself as 'effortlessly brilliant,' but maybe we need to resist this temptation."

"On the face of it, believing in innate brilliance as the driver of success seems innocuous enough, even if misguided, given the crucial role effort and training play in achievement," says Kerry Marsh, a program officer in NSF's Social Psychology program, which funded the research. "But when such beliefs occur in a cultural context of potential bias against members of a gender or ethnic group, such 'brilliance beliefs' could result in a less hospitable context for potential scholars. That is a loss for all STEM disciplines, including the social, behavioral and economic sciences."

Leslie and Cimpian are in the process of conducting numerous follow-up studies that test the field-specific ability beliefs hypotheses in a variety of ways, including following up on a finding in the current study regarding racial diversity.

The study provides preliminary evidence that African American representation is also predicted by "brilliance required" messages and cultures. However the study primarily was designed to investigate women's representation, making further work needed to fully explore the hypothesis as it applies to racial diversity.

"Following up on this is an important priority for us," says Leslie.