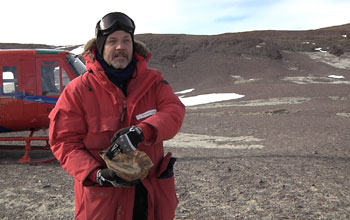 Erik Gulbranson, a visiting professor at the University of Wisconsin-Milwaukee, trudges up a steep ridge overlooking his field camp of mountain tents and pyramid-shaped Scott tents in Antarctica's McMurdo Dry Valleys. A brief hike nearly to the top of a shorter ridge ends at the quarry, where picks and hammers have chopped out a ledge of sorts in the slate-grey hillside.

Sometime about 220 million years ago, a meandering stream flowed here and plants grew along its banks. Something, as yet unknown, caused sediment to flood the area rapidly, which helped preserve the plants. Gulbranson splits open a grey slab of siltstone in the quarry to reveal amazingly well-preserved Triassic plant fossils, as if the leaves and stems had been freshly pressed into the rock only yesterday.

"It's a mixture of plants that don't exist anymore," he says, "but we have some plants in these fossil ecosystems that we might know today, like ginkgo."

On the one end are fossils from an extinct genus of fork-leaved seed ferns called Dicroidium that dominated during the Triassic, a geologic period that lasted from about 252 to 200 million years ago. Other plants frozen in time on this remote hillside include species in the extant cycad family, which today favor subtropical and tropical climates.

Even better are the fossilized specimens no one can yet identify.

"They're brand new to Antarctica," said Gulbranson, who is co-principal investigator on a project investigating the evolution of ancient plants in Antarctica and the high-latitude environments in which they grew.

Also new to Antarctica: A Triassic-age fossil forest of 37 tree stumps, located less than a couple of kilometers almost directly south from the quarry. These were discovered about a week after Gulbranson and a team of paleontology experts in plants, fungi and other areas arrived at Allan Hills by helicopter and Twin Otter aircraft.

It is only the second fossil forest from the Triassic ever found in Antarctica. It's about a third the size of a site in Gordon Valley near the Beardmore Glacier in the Transantarctic Mountains. The Gordon Valley fossil forest, discovered in 2003, contains 99 preserved seed-fern tree trunks. The trees are estimated to have grown about 20 meters in height along what were likely the banks of an ancient river system.

The newly discovered Allan Hills fossil forest, at the base of the 1,800-meter-high Roscolyn Tor, represents the second largest fossil forest in Antarctica, according to Gulbranson. About a dozen fossil forests have been found from an even earlier time period called the Permian, which extends roughly between 298 and 252 million years ago.

"It's an important find," said Gulbranson, whose expertise as a sedimentologist and geochemist allows him to reconstruct the environment that existed when these trees, shrubs and forests flourished. He does this by using various techniques, including grinding down small samples of the fossil growth rings to see variations in how the ancient flora once grew.

The story of the fossil find was captured in video produced by Peter Rejcek and Ralph Maestas, of the Antarctic Sun newspaper, which is published by the U.S. Antarctic Program (USAP). NSF manages the USAP. Discover the full story in the Antarctic Sun.