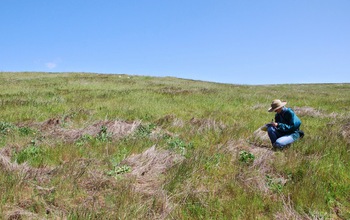 Scientists conduct a plant survey in a grassland on the UC Santa Cruz campus.

On Earth Day, a study of disease dynamics in a California grassland has revealed fundamental principles underlying the spread of pathogens, or disease-causing microbes, among species.

The results, announced today in the journal Nature, have implications for the maintenance of biodiversity and for addressing practical problems related to plant disease.

Researchers at the University of California (UC), Santa Cruz, studied the phenomenon of "pathogen spillover" in grassland species on the UC Santa Cruz campus.

They found that the amount of disease present on each species could be predicted by the abundance of its close relatives in the grassland. When there were many individuals of the same or similar species living close together, pathogens spread more quickly.

Perhaps unexpectedly, that in turn promotes biodiversity by creating openings for less-common species that are not attacked by these same pathogens.

The findings reveal a tight link between the structure of a plant community and the vulnerability of individual species to disease.

"These scientists demonstrate that the relatedness of species in communities is an important predictor of disease prevalence," said Alan Tessier, acting director of the National Science Foundation's (NSF) Division of Environmental Biology, which funded the research.

The researchers were able to predict which plant species introduced into the grassland would be most strongly affected by naturally-occurring diseases.

Ingrid Parker, an ecologist and evolutionary biologist at UC Santa Cruz and first author of the paper, said the study adds an important new dimension to a longstanding concept in ecology known as the "rare species advantage."

"The rare species advantage is thought to be a major driver of biodiversity in natural ecosystems," Parker said. "Most pathogens are not host specialists--they can easily move from one species to another. Whether pathogens 'spill over' depends on how closely related other species nearby are.

"Our study shows that it's the structure of the whole community around a species that affects its vulnerability to disease."

In a large-scale experiment, the researchers introduced 44 plant species from outside California. (The plants were removed before they reproduced.)

The biologists found that species with few close relatives in the grassland escaped disease, while those closely related to many resident species always showed high levels of disease.

The researchers were able to make surprisingly accurate predictions of disease in introduced species based on their phylogenetic, or evolutionary, distance from local species.

"It was kind of shocking how well we were able to predict disease at a local scale," Parker said.

To incorporate the phylogenetic distance between species into their predictions of disease dynamics, the researchers used a "PhyloSusceptibility model" developed by scientist Gregory Gilbert at UC Santa Cruz and two other paper co-authors, Roger Magarey and Karl Suiter of North Carolina State University, who work with the U.S. Department of Agriculture's (USDA) Animal and Plant Health Inspection Service.

The model is based on USDA's global database of fungal pathogens and host plants, and can be used to predict the probability of two species sharing a pathogen.

"If a plant pathogen from Brazil suddenly shows up in Southern California, you want to know what plants in California are most likely to be attacked," Gilbert said.

By showing that the PhyloSusceptibility model makes accurate predictions, the results suggest a range of potential applications.

It could also be used in agriculture to design intercropping or rotation systems to decrease crop disease.

Imported plants can bring new pathogens and pests into an area. The PhyloSusceptibility model could be used to assess the vulnerability of local species to pathogen spillover from such plant introductions, the scientists say.