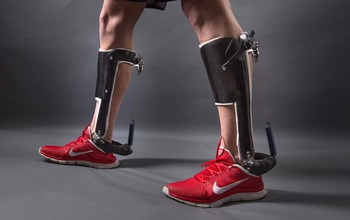 A passive-elastic ankle exoskeleton was shown to reduce the energy cost of human walking.

Humans have evolved to be incredibly efficient at walking. In fact, simulations of human locomotion show that walking on level ground and at a steady speed should theoretically require no power input at all.

But anyone who works on their feet or has taken an arduous hike knows otherwise. In fact, people expend more energy during walking than any other activity in daily life, and for the elderly and those with mobility issues, that energy can be precious.

For decades, engineers have envisioned systems that could make walking easier. In fact, so many researchers have tried to build unpowered exoskeletons and failed that it was hotly debated in the field whether it was even possible to improve the efficiency of walking without adding an external energy source.

In news reported today in Nature, researchers from Carnegie Mellon University and North Carolina State University have demonstrated an unpowered ankle exoskeleton that reduces the metabolic cost of walking by approximately 7 percent. The results are roughly the equivalent of taking off a 10-pound backpack, and are equivalent to savings from exoskeletons that use electrically-powered devices. The research was based upon work supported by the National Science Foundation.

"It's a real exciting milestone for the field of assistive devices," said Thomas Roberts, a professor of ecology and evolutionary biology at Brown University and an expert in the biomechanics of locomotion, who was not involved in the research. "They've taken an assistive device and lowered the cost of human walking. That's kind of a big deal because walking is already really cheap, and they did it with a very simple, but clever device."

The device is the result of eight years of patient and incremental work, mapped out on a whiteboard by Steve Collins and Greg Sawicki when they were graduate students together at the University of Michigan in 2007.

"Walking is more complicated than you might think," said Collins, an assistant professor of mechanical engineering at Carnegie Mellon. "Everyone knows how to walk, but you don't actually know how you walk."

Collins, Sawicki and co-author M. Bruce Wiggin succeeded where so many in the past had failed by performing careful analyses of the biomechanics of human walking and then designing a simple, ultra-light-weight device that relieved the calf muscle of its efforts when it wasn't doing any productive work.

Ultrasound imaging studies had revealed that the calf muscle exerts energy not only when propelling the body forward, but also when it performs a clutch-like action, holding the Achilles tendon taut.

"Studies show that the calf muscles are primarily producing force isometrically, without doing any work, during the stance phase of walking, but still using substantial metabolic energy," Collins explained. "This is the opposite of regenerative braking. It's as if every time you push on the brake pedal in your car, you burn a little bit of gas."

With this insight in mind, the team created an ankle exoskeleton that offloads some of the clutching muscle forces of the calf, reducing the overall metabolic rate.

In developing the device, the research team faced a challenge. When you place heavy objects on the legs, there's an initial penalty that increases your energy costs. Previous efforts had not been able to overcome that initial penalty. For that reason, it was critical to the researchers to keep the device light.

Over several years and many iterative designs, the team developed a carbon-fiber design that is ultra-light, yet rugged and functional. The entire device weighs approximately one pound per leg, or less than a work boot.

According to experts, the device is a triumph of elegance, simplicity and bio-specific interventions over complex, over-engineered designs.

"This unexpected and unprecedented result, with the potential to improve such a familiar human activity as walking, was discovered during a fundamental scientific study of mechanically augmented ankle function," said Jordan Berg, a program director at NSF. "It is a great example of how basic research can lead to new beneficial devices."

One of the long-term goals of Collins and Sawicki's project is to use lightweight, energy-efficient exoskeletons to assist individuals with mobility issues.

"You can imagine these lightweight efficient devices being worn on the affected limb to help people with the permanent aftereffects of stroke," Collins said. "We're hopeful that designs that use similar techniques can help people who have had a stroke walk more easily. We're still a little ways away from doing that, but we certainly plan to try."

In the future, the team intends to test the current device with individuals who have a variety of mobility issues to determine what designs might work best for different populations. They are also interested in developing exoskeleton components for the knee and the hip, where they believe they may be able to garner even larger benefits.

"As we understand human biomechanics better, we've begun to see wearable robotic devices that can restore or enhance human motor performance," said Collins. "This bodes well for a future with devices that are lightweight, energy-efficient, and relatively inexpensive, yet enhance human mobility."