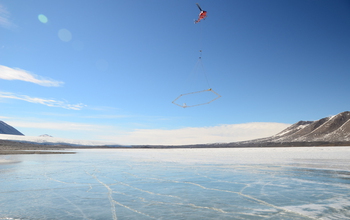 A helicopter flies the AEM sensor over Lake Frxyell in the McMurdo Dry Valleys.

Using a novel, helicopter-borne sensor to penetrate the surface of large swathes of terrain, a team of researchers supported by the National Science Foundation (NSF) has gathered compelling evidence that beneath Antarctica's ice-free McMurdo Dry Valleys lies a salty aquifer that may support previously unknown microbial ecosystems and retain evidence of ancient climate change.

An airborne electromagnetic (AEM) sensor, called SkyTEM, mounted to the helicopter, allowed the team to discover that brines--salty water--form extensive aquifers below glaciers, lakes and within permanently frozen soils. The brines may also play an important role in contemporary biological processes in the Dry Valleys.

"These unfrozen materials appear to be relics of past surface ecosystems and our findings provide compelling evidence that they now provide deep subsurface habitats for microbial life despite extreme environmental conditions," says the study's lead author Jill Mikucki, an assistant professor of microbiology at the University of Tennessee, Knoxville. "We believe the application of novel below-ground visualization technologies can not only reveal hidden microbial habitats, but can also provide insight on glacial dynamics and how Antarctica responds to climate change."

In addition to providing answers about the biological adaptations of previously unknown ecosystems, the new information could also help scientists understand whether similar conditions might exist elsewhere in the solar system, specifically beneath the surface of Mars, which has similarities to the Dry Valleys.

"Over billions of years of evolution, microbes seem to have adapted to conditions in almost all surface and near-surface environments on Earth. Tiny pore spaces filled with hyper-saline brine staying liquid down to -15 Celsius [five degrees Fahrenheit] may pose one of the greatest challenges to microbes." said Slawek Tulaczyk, a glaciologist and coauthor at the University of California, Santa Cruz. "Our electromagnetic data indicate that margins of Antarctica may shelter a vast microbial habitat, in which limits of life are tested by difficult physical and chemical conditions."

The team also found evidence that brines flow towards the Antarctic coast from roughly 18 kilometers (11 miles) inland, eventually discharging into the Southern Ocean, a biologically rich body of water that encircles Antarctica. It is possible that nutrients from microbial weathering in these deep brines influence near-shore biological productivity in that ocean. However, the vast majority of Antarctica's coastal margins remain unexplored. This new survey highlights the importance of these sensitive interfaces.

The Division of Polar Programs in NSF's Geoscience's Directorate supported the AEM sensor project through a collaborative award to Mikucki, Tulaczyk and Ross Virginia, a biogeochemist at Dartmouth College. The division manages the U.S. Antarctic Program, through which it coordinates all U.S. scientific research on the Southernmost continent and provides the logistical support to that research.

The NSF-funded researchers were part of an international, interdisciplinary team that used the AEM sensor, which was developed at Aarhus University in Denmark, to produce extensive imagery of the subsurface of the coldest, driest desert on our planet, the McMurdo Dry Valleys. Using a helicopter to make the observations allowed large areas of rugged terrain to be surveyed very efficiently.

The results shed new light on the history and evolution of the Dry Valley landscape, which, uniquely in the Antarctic, is ice-free and which during the height of the southern summer has free flowing rivers and streams. The Dry Valleys also are home to briny lakes at the surface and beneath at least one of the glaciers that intrude into the Valleys.

Overall, the Dry valleys ecosystem--intensely cold, very dry and home only to microscopic animal and plant life--closely resembles, during the Antarctic summer, conditions on the surface on Mars.

In addition to many other studies, the Dry Valleys are home to projects that are investigating how climate has changed over geologic time.

"This project is studying the past and present climate to, in part, understand how climate change in the future will affect biodiversity and ecosystem processes," said Virginia. "This fantastic new view beneath the surface will help us sort out competing ideas and theories about how the Dry Valleys have changed with time and how this history influences what we see today."

The AEM sensor was flown over the Taylor Glacier, one of the best-studied glaciers in the world, in November 2011. Taylor Glacier has a unique feature known as Blood Falls, where iron-rich brine from the subsurface is released at the front of the glacier. Blood Falls is known to harbor an active microbial community where organisms use iron and sulfur compounds for energy, and, in the process, facilitate rock weathering.

AEM instrumentation lead, Esben Auken, has flown the sensor all over the world, but this was the first time they tackled Antarctica.

"Antarctica is by far the most challenging place we have been." Auken noted. "It was all worth it when we saw the raw data as it was offloaded from the helicopter; it clearly showed we were on to some extraordinary results which no one had been able to produce before."

He added, "We were excited because we knew this would change the way scientists in the future would view the hydrological cycle in the Dry Valleys. For us, the project was the result of many years of developing the best mapping technology in the world, and now we were able to collaborate with scientists who had worked in the Antarctic environment for decades and were willing to take the risk of letting us prove this could be done with success."