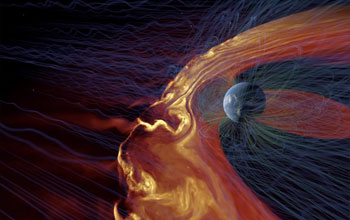 A 24-minute, high-resolution science documentary about the dynamics of the sun that features data-driven visualizations produced by the National Center for Supercomputing Applications (NCSA) at the University of Illinois at Urbana-Champaign debuts tonight at the Louisiana Art & Science Museum in Baton Rouge before rolling out to more than a dozen planetariums and science centers around the world.

"Solar Superstorms" was produced as part of a project called CADENS (Centrality of Digitally Enabled Science). Supported by a grant from the National Science Foundation (NSF), CADENS spotlights the new knowledge produced thanks to the massive computing and data analysis capabilities now available to scientists, engineers and scholars.

In addition to NCSA's Advanced Visualization Laboratory (AVL), led by Donna Cox, the CADENS team includes Spitz Creative Media, Thomas Lucas Productions and the leaders of the NSF-supported Blue Waters and XSEDE projects that enable thousands of people across the country to carry out computational and data-driven research.

"The 'Solar Superstorms' dome show is a direct result of scientific research whose advance is dependent on extremely powerful computer simulation and visualization," said Rudolf Eigenmann, a program director at NSF. "The resulting representations of the high-resolution, complex numeric simulations convey the beauty, the power and the human relevance of solar storms."

Narrated by acclaimed actor Benedict Cumberbatch, "Solar Superstorms" asks the question, "What can cause our normally benign sun to erupt in such fury that it can threaten the world's power and technological infrastructure?"

To answer that question, this innovative show takes audiences into the inner workings of our star. It follows the path of hot magnetized gas from deep inside the sun, through its tangled journey through the sun's churning outer layers and on to explosive magnetic eruptions so powerful they can affect the Earth.

To tell this story, AVL visualized data from researchers across the country who use digital tools to understand solar phenomena. For example, Homa Karimabadi, Mahidhar Tatineni and Vadim Roytershteyn of the University of California, San Diego, used NCSA's Blue Waters supercomputer to simulate a solar wind interacting with Earth's magnetic field during a powerful solar storm. Data from his numerical simulations were visualized by AVL, creating a dramatic view of the resulting turbulent front. Such large disturbances can result in loss of communication satellites and blackouts.

Calculating the evolution of the sun's magnetism is too complex for any single computational simulation, so the show's animations combine four simulations by different groups of scientists that span from the deep body of the sun to the solar corona.

Other scientists whose work is featured in the documentary include Yuhong Fan, Matthias Rempel and Mark Miesch of the National Center for Atmospheric Research (NCAR); Nick Nelson of the Los Alamos National Laboratory; Robert Stein of Michigan State University and John Wise of Georgia Tech.

"Solar Superstorms" was produced in association with Fiske Planetarium at the University of Colorado Boulder and was made possible with support from NSF, the Commonwealth of Pennsylvania and the Pennsylvania Film Office.

After tonight's North American premiere, "Solar Superstorms" opens July 4 at Planétarium Gallilée at Montpellier Méditerranée Métropole in France. It will then roll out to more than a dozen planetariums and science centers around the world, including Planetarium Hamburg (Germany), the State Museum of Pennsylvania (Harrisburg), Tellus Science Museum (Cartersville, Georgia) and the Eugenides Planetarium (Athens).

"We are very impressed with this new film," said Cyril Ruiz of Planétarium Gallilée. "The imagery is of great quality and the narration is succinct, allowing the audience plenty of room to contemplate the images in this highly immersive medium."