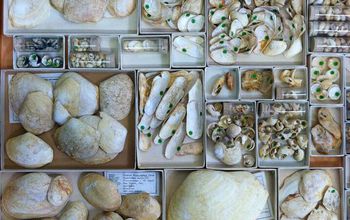 Digitizing these Pleistocene fossils from California, will improve their value to researchers.

Slime molds, smut fungi, powdery mildew: These are some of the millions of microfungi documented in biological institutions across America.

These ubiquitous microscopic organisms play important ecological and environmental roles, yet little is known about their distribution or biology. But what if we could digitize and combine those disparate microfungi documents, creating a rich trove of data for researchers to explore?

That's the goal of the Microfungi Collections Consortium, one of the latest projects funded through the National Science Foundation's (NSF) Advancing Digitization of Biodiversity Collections (ADBC) program. ADBC expands and enhances America's biodiversity collections, providing greater access to centuries of discovery that document the diversity of life on Earth.

ADBC projects support more efficient, innovative ways to access biological and paleontological research collections. Data for millions of biological specimens are digitized and added to the National Resource for Digitization of Biological Collections (iDigBio), accessible to scientists, educators and the public.

This is the fifth round of ADBC projects: seven awards, totaling more than $5.8 million and incorporating the efforts of scientists from nearly 50 institutions across the United States.

"Biological diversity is critical to the future of our planet, yet records of that biodiversity are often stored in private collections, inaccessible to scientists and the public," said James Deshler, a division director in NSF's Biological Sciences Directorate, which funds the ADBC program. "ADBC takes this data and stores it for the world to see, from the smallest collections started by one passionate scientist to collections with tens of thousands of specimens. The program is structured to allow a maximum diversity of scientists and institution types to work together."

TCNs focus on "grand challenge" questions in biodiversity, and facilitate research opportunities as data becomes increasingly available. Two TCNs were awarded in this ADBC round. The Microfungi Collections Consortium brings together 38 institutions in 31 states to digitize their microfungi records, spurring new research and insights into these important organisms. The Consortium will digitize specimen descriptions, illustrations and annotation notes for more than 1.2 million North American microfungi specimens. The principal investigator on the award is Andrew Miller of the University of Illinois at Urbana-Champaign.

The second TCN focuses on the fossil record of marine invertebrate communities in the Eastern Pacific. Starting from the Cenozoic period--which began about 66 million years ago, shortly after the extinction of the dinosaurs--this fossil record is especially rich. Yet most specimens aren't digitized, and are therefore unavailable for large, coordinated study.

This TCN--a partnership of seven primary institutions and one federal agency, the Smithsonian Institution--will capture this fossil record, providing invaluable data for understanding how organisms responded to ecological and environmental changes: knowledge to help scientists better understand and predict how today's marine biodiversity might be impacted by climate change. The principal investigator on the award is Charles Marshall of the University of California, Berkeley.

Both TCNs also provide graduate and undergraduate training opportunities, and outreach to K-12 educators, students and the public.

PEN awards allow institutions that were not fully ready to participate in the initial TCN to add their collections. Details on the five funded PEN awards are below: