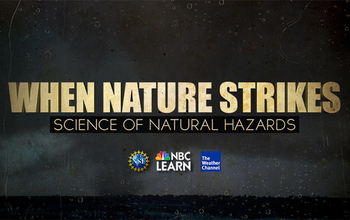 The National Science Foundation (NSF) Directorate for Geosciences, The Weather Channel and NBC Learn today released an original video series that explores the science of natural disasters to avert their human and economic toll. The 10-part series, "When Nature Strikes: Science of Natural Hazards," spotlights fundamental scientific research that NSF funds to improve predictability and risk assessment that will reduce impacts from catastrophic events.

Superstorm Sandy, Hurricane Katrina, California wildfires, earthquakes, tornadoes, tsunamis--natural disasters are devastating and costly. Thousands of human lives and tremendous amounts of property are lost annually. In 2013 alone, such events killed some 20,000 people and caused over $130 billion in damage worldwide.

"Our nation has become increasingly vulnerable to natural disasters," said NSF Assistant Director for Geosciences Roger Wakimoto, "Important research to improve our understanding of these hazards will lead to improved forecasts and warnings that will save lives and help mitigate the impact on society and the economy."

The series, narrated by The Weather Channel's Marshall Shepherd, a professor of meteorology at the University of Georgia and host of the program Weather Geeks, will air on The Weather Channel, NBC affiliate stations, and can also be viewed (free of charge) online at NBCLearn.com, NSF.gov and Science360.gov.

From these videos, viewers will learn about a variety of natural disasters and the tools and resources that can reduce loss of life and damage to infrastructure and the environment. NSF-funded experts from around the country are featured in each segment.

1. Overview - "When Natures Strikes: the Science of Natural Hazards," a series that showcases research teams supported by NSF's Directorate for Geosciences, explores natural hazards, how they form, where they appear and when they strike.

2. Earthquakes - John Vidale, a University of Washington seismologist and director of the Pacific Northwest Seismic Network, is leading a team of scientists monitoring ground motion across Washington and Oregon to prepare residents for the next, magnitude 9 "megathrust" earthquake to hit their region.

3. Volcanoes - Michael Manga, a University of California Berkeley geologist, studies the explosive Armageddon-like eruption at Long Valley Caldera some 50 years ago for insights on supervolcanoes today.

5. Flash Floods - Russ Schumacher, an atmospheric scientist at Colorado State University, studies areas with combined factors such as heavy precipitation, particular geography and soil conditions that put them at risk for flash floods, one of the most common and deadly natural disasters.

6. Landslides - Falling rocks, giant walls of mud and landslides past and present inform research by David Montgomery, a professor of geomorphology at the University of Washington. Montgomery works to unravel how and why landslides happen.

7. Tornadoes - Tornadoes form in minutes. Howard Bluestein of the School of Meteorology at the University of Oklahoma and Adam Houston of the University of Nebraska-Lincoln study why some storms result in tornadoes while others do not. With advanced warning, people can prepare and lives will be saved.

8. Space Weather - Space weather has the potential to wreak havoc on everything from satellite communications to electricity. Sarah Gibson, an astrophysicist at the National Center for Atmospheric Research (NCAR) in Boulder, Colorado, examines space weather, which has all sorts of natural disaster implications on our planet.

9. Wildfires - With just one lightning strike, a wildfire can ignite and burn thousands of acres of land, devastate communities and claim lives. Janice Coen, with the National Center for Atmospheric Research (NCAR) in Boulder, Colorado, is working on how to predict wildfire behavior.

10. Tsunamis - The massive wave of a tsunami can form thousands of miles offshore and then travel quickly across an ocean to devastate coastal communities. Anne Trehu and Dan Cox of Oregon State University are studying how tsunamis are formed and how to survive them.

Use #NatrlHazards and participate in a Twitter chat, hosted by NSF and NBC Learn Thursday, Oct. 1, at 6 p.m. EDT. This discussion will feature The Weather Channel's Marshall Shepherd (@DrShepherd2013) and other scientific experts seen in the series: Jenni Evans (@JenniLEvans), Russ Schumacher (@russ_schumacher) and Adam Houston (@ahous). Join us!