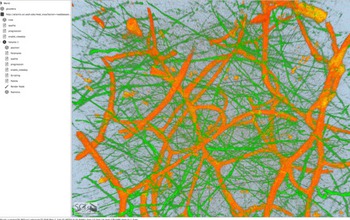 Big data visualization tools are vital to advance understanding of the brain.

It's tough to unravel the mysteries of the brain when your computer is frozen.

To aid frustrated brain researchers, a multidisciplinary team of scientists at the University of Utah has created a faster method for generating and exploring high-resolution, 3-D images of the brain.

Alessandra Angelucci, a neuroscientist with the Moran Eye Center at Utah's Ophthalmology Department whose research is funded by the National Science Foundation (NSF), says the tool allows her and her colleagues to better visualize the complex connections between neurons.

"We know that brain function emerges from the activity of neural networks," Angelucci says. "To understand how the brain works, we need to know how it is wired."

The work by the Utah team is part of a movement across the scientific community to come up with new ways to use and analyze information. Scientific instruments ranging from brain scanners to microscopes, to telescopes are increasingly improving and generating larger amounts of high-quality data, creating the need for more efficient data-processing approaches.

"This is really an extreme big data project," says Cameron Christensen, a Utah computer scientist on a team led by Valerio Pascucci at the SCI Institute at Utah, who created the new method at the Center for Extreme Data Management Analysis and Visualization. Pascucci and his team are funded by NSF's PetaApps program, designed to accelerate discovery through petascale simulations and analysis.

"We're living in a time of extreme big data. This tool could have applications for astronomy, climate change and other fields," says Christensen.

Big data tools are vital to advance the understanding of the brain, universe and other topics, as evidenced by national efforts such as the BRAIN Initiative.

The tool is a new twist on an existing technology.

The technology, known as Visualization Streams for Ultimate Scalability (ViSUS), turns massive quantities of digital data into visual information that the human mind can understand. ViSUS has been used for years in several different areas of research, including clean energy simulations on high performance computing platforms.

The software processes terascale-sized datasets in a way that allows researchers to explore the images interactively. The typical laptop has about 4 to 15 gigabytes of memory. One terabyte has 1,000 times that much. That's doable for a supercomputer, but not a grad student's Mac.

"Previously, if you wanted to interact with this volume of data, you couldn't. Everything would freeze," Christensen says.

Think of the desk-smacking frustration involved in trying to open an image file 1,000 times greater than your computer can handle.

This is a frustration brain researchers know well.

A whole mouse brain is about 31 terabytes of imaging data. That is the same amount of data as about 32 million digital photographs.

The visual cortex of the macaque brain, which Angelucci studies, is 318 terabytes.

"We call these 'terror-bytes,'" said Terry Sejnowski of the Salk Institute for Biological Sciences, a computational neuroscientist who moderated the Society for Neuroscience press conference at which the findings were announced.

The new approach developed by Pascucci's team to handle these terror-bytes is hierarchical, loading images of increasing resolution as the user clicks to see more details.

"It's a little like Google Maps, where you zoom in and in. Except with our technique, you don't reload all the data each time. You only download the differences between levels, so it's faster and requires less memory," he says. "Therefore, it opens the possibility of dealing with 3-D microscopy volumes instead of just 2-D maps."

Angelucci and her colleagues used the technology to stream 3-D images of a primate's visual cortex.

They paired this tool with a neuroscience technique called CLARITY, which makes surrounding brain tissue transparent. (CLARITY was developed by NSF-funded researchers in 2013.)

"The development of CLARITY made our lives much easier," said postdoctoral fellow and neuroscientist Frederick Federer, who works with Angelucci. "But the datasets couldn't load on our computers."

The team is now developing automated ways to trace the connections between neurons in the images, and to make the new interface accessible for other researchers.