The nuanced weapons of electric eels

Ability to stun a more sophisticated weapon than previously thought 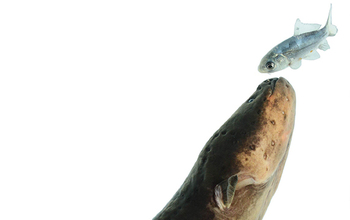 An electric eel reaches for a fish.

Electric eels are formidable predators. Growing up to eight feet long and weighing as much as 44 pounds, they can generate 600 volts of electricity--five times the power of a home socket--to stun and kill prey.

New research shows that this fearsome weapon is more sophisticated than scientists thought. Electric eels use electricity as a sensory system, and can alter their voltage to overcome struggling prey.

Scientists have long known that electric eels have two power modes: A low-voltage weak output, used when the eel searches for prey, and high-voltage pulses it uses as a weapon.

With funding from the National Science Foundation, Kenneth Catania of Vanderbilt University discovered that eels also use their high-voltage mode to sense and track meals. The pulses come fast and powerful--just milliseconds apart--and allow eels to hone in on prey, without the aid of vision or other mechanic or chemical senses. The research was published recently in Nature Communications.

"It is an alien sensory system to us," Catania said.

An attacking electric eel is akin to a swimming Taser. A volley of pulses stuns prey, stopping all voluntary behavior. But it doesn't halt the prey entirely, and so eels keep pulsing to guide them as they attack, using high-voltage, high-frequency pulses much like radar, or echolocating bats.

An animal with such a "dichotomous trait" is unique, Catania said. "It can be used for sensing and attacking at the same time."

In related electric eel research, published this week in Current Biology, Catania also discovered that eels can amplify their voltage to subdue prey. The animal will curl its serpentine body around a large fish, a snapping crayfish or other particularly spiny or squiggling prey, nearly doubling the voltage.

"The head and tail of the eel are essentially the negative and positive sides of a battery," Catania said. When they circle themselves, bringing the negative tail to the positive head, it boosts the voltage.

Catania saw eels in his lab exhibiting this curling behavior, and wanted to understand why. He built an "eel chew toy"--a dead fish or crayfish tail studded with a pair of electrodes--to measure the eel's voltage while curled.

"This animal, it really is like a physics textbook," he said. "Just by moving its body it can concentrate its current through the prey."

The current causes devastating muscle fatigue in the prey, which allows the eel to wrestle it into submission and reposition it for easy swallowing.

Darwin himself wondered at how the eel's electric weapon evolved in "On the Origin of Species."

These new discoveries about the animal are a lesson about both science and nature, Catania said.

"Even after an animal has been studied for 200 years, there are still incredible things to learn."