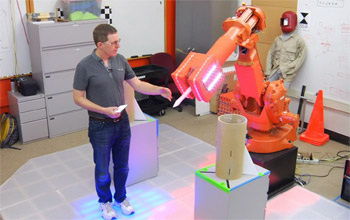 
The Intelligent Workcell project envisions how robots and people may one day work together safely.

Today the National Science Foundation (NSF) -- in partnership with the Department of Defense (DOD), the Defense Advanced Research Projects Agency (DARPA), the National Aeronautics and Space Administration (NASA), the National Institutes of Health (NIH) and the United States Department of Agriculture (USDA) -- announced $37 million in new awards to spur the development and use of co-robots, robots that work cooperatively with people.

From unmanned vehicles that can inspect and fix ailing infrastructure to co-robots that can collaborate with workers on manufacturing tasks, scientists and engineers are developing the next generation of robots that can handle critical tasks in close proximity to humans, providing for unprecedented safety and resilience.

The awards mark the fourth round of funding through the National Robotics Initiative (NRI), a multi-agency program launched in June 2011 as part of the Advanced Manufacturing Partnership (AMP), with NSF as the lead federal agency.

This year, the initiative funded 66 new research proposals -- of one to four years in duration -- to 49 distinct institutions in 27 states. Together, they advance the fundamental understanding of robotic sensing, motion, computer vision, machine learning and human-computer interaction.

The NRI awards address the entire development cycle of robots, from fundamental research to prototyping and testing the deployment in critical environments to help make safe, helpful and affordable co-robots a reality.

The awards include, for example, research to prototype improved brain-controlled prosthetic devices, to design teams of robots that can undertake search-and-rescue operations, and to build robots that can assist with a variety of healthcare tasks.

"Our engineers and scientists are creating a world where robotic systems serve as trusted co-workers, co-inhabitants, co-explorers and co-defenders," said Pramod Khargonekar, NSF's assistant director for engineering. "The National Robotics Initiative serves the national good by encouraging collaboration among academic, industry, nonprofit and other organizations -- and by speeding the creation of the fundamental science and engineering knowledge base used by researchers, applications developers and industry."

NSF's investments in robotics explore both the technical and engineering challenges involved in developing co-robots, as well as the long-term social, behavioral and economic implications of co-robots across all areas of human activities.

As part of the NRI, NSF also supports developing new methods to establish and infuse robotics in educational curricula. A full list of the NRI investments made by NSF is available through NSF's award search.

Looking ahead, NSF recently issued an updated call for NRI proposals, which the Department of Energy joined as a new partner.

"Basic research to develop the underlying understanding and technologies for robots and robotic systems is resulting in profound advances in the field with the potential to augment human abilities, perform dangerous tasks unsuitable for people and improve our quality of life," said Jim Kurose, NSF's assistant director for computer and information science and engineering . "Working together with many federal agencies has helped to develop a broad portfolio of robotics research with a greater impact than any one agency could do by itself. We are excited to be growing this effort through the addition of the Department of Energy.”

Since its inception, NSF and partnering agencies have invested more than $150 million in fundamental research, prototyping and testing, and education efforts through the NRI.