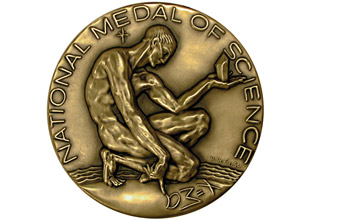 The National Medal of Science is the nation's highest scientific honor.

The White House has awarded medals to the latest recipients of the National Medal of Science and National Medal of Technology and Innovation -- the nation's highest honors for achievement and leadership in advancing the fields of science and technology.

"Science and technology are fundamental to solving some of our Nation's biggest challenges," President Obama said. "The knowledge produced by these Americans today will carry our country's legacy of innovation forward and continue to help countless others around the world. Their work is a testament to American ingenuity."

The National Medal of Science was created by statute in 1959 and is administered for the White House by the National Science Foundation (NSF). Awarded annually, the Medal recognizes individuals who have made outstanding contributions to science and engineering. The President receives nominations from a committee of Presidential appointees based on their extraordinary knowledge in and contributions to chemistry, engineering, computing, mathematics, and the biological, behavioral/social and physical sciences.

Among this year's nine recipients of the National Medal of Science, seven received NSF support at some point in their research careers.

NSF Director France Córdova spoke to the laureates at a May 19 National Medals gala. "Your creativity, your invention, your curiosity is what has brought all of you here tonight -- and what has propelled our nation to leadership in science and innovation," she said.

The National Medal of Technology and Innovation was created by statute in 1980 and is administered for the White House by the U.S. Department of Commerce's Patent and Trademark Office. The award recognizes those who have made lasting contributions to America's competitiveness and quality of life and helped strengthen the Nation's technological workforce. A distinguished independent committee representing the private and public sectors submits recommendations to the President.

Six of the eight National Medal of Technology and Innovation awardees have received NSF funding.

The new recipients are listed below.

National Medal of Technology and Innovation