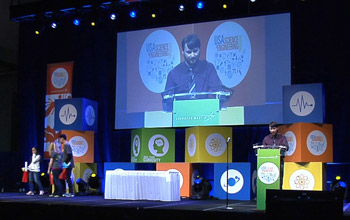 The competition challenged high school students to think big -- or, in this case, small -- to create superheroes that harness their powers from nanotechnology.

Wheaton applauded the students' creative storylines, noting that when he was Wesley Crusher on the TV series Star Trek: The Next Generation, such plots were only imaginary. "It is amazing what is today plausible due to the power of nanotechnonlogy," he said.

In a video introduction before Wheaton announced top prize winners, Stan Lee said it was "great that I can virtually join you today." He remarked on the winners' "creativity, ingenuity and initiative."

"From one superhero storyteller to the next, congratulations," Lee said.

All weekend, the students displayed their superheroes and described the nanoscience behind them to thousands of attendees at the 2016 USA Science & Engineering Festival in Washington, D.C.

"All three finalists immersed themselves in the worlds of nanotechnology and art, told a great story, entertained and educated -- all at the same time," said Lisa Friedersdorf, deputy director of the National Nanotechnology Coordination Office. "Their creations will surely motivate additional students to imagine and learn more about what is possible with nanotechnology."

Top award winners in this competition show that with imagination and nanotechnology, possibilities abound, said Mihail C. Roco, NSF senior advisor for science and engineering and a key architect of NNI.

"These school students have aimed higher than ever in their lives, pushing their abilities in novel domains where seeds for their high-tech future may germinate," Roco said. "We need a constant regeneration of new talent to exploit this general purpose science and technology field to its outstanding potential. These students are well on their way."

NSF and NNI challenges students to submit written entries explaining their superhero and nanotechnology-driven gear, along with a one-page comic or 90-second video. A panel of judges from academia and multimedia platforms selected semifinalists and finalists, from which the public selected Madeline Chang as its People's Choice winner.

Top prizes were determined by judges Elise Lemle, director of special projects at Two Bit Circus; Lizabeth Fogel, director of Education for the Walt Disney Company and Chair of the Board for the Partnership for 21st Century Learning; and James Murday, director of physical sciences at the University of Southern California's Washington, D.C., office of research advancement.

Visit the Generation Nano competition website for competition details such as eligibility criteria, entry guidelines, timeline, prizes and videos/comics from the finalists and semifinalists. And stay tuned for information on next year's competition.