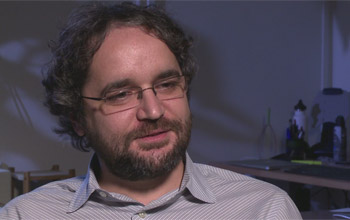 "It's a pleasure to recognize Dr. Dincã as this year's recipient of the Alan T. Waterman Award," said NSF Director France Córdova. "His research in microporous solids is revolutionizing how scientists approach this exciting new technology, opening the door for future discoveries."

Congress established the Alan T. Waterman Award in 1975 to recognize outstanding young scientists whose accomplishments showed exceptional promise of significant future achievement. Candidates may not be more than 35 years old, or seven years beyond receiving a doctorate degree.

During the past 40 years, the award has been used by winners to document the earliest history of life on Earth, to find earthlike planets outside our solar system and even discover ways to build replaceable body parts for people suffering chronic conditions.

MOFs are materials with microscopic pores that act like sponges and can absorb or pick up various molecules and ions. These properties make them useful for gas and vapor separation, drug storage and delivery, plus any number of other applications. In the past 15 years, more than 20,000 MOFs have been reported and studied.

He and his team also focus on giving MOFs redox activity. This imparts important functionality to a material, allowing it to not only selectively absorb molecules into its dynamic framework, but change them chemically through controlled catalysis.

In addition to the Alan T. Waterman medal, Dincã will receive a grant of $1 million over a five-year period for scientific research or advanced study in any field.

Dincã says he has no predetermined goals for the next phases of his research, but he's looking to explore areas of research he described as "a little bit unknown to us."

"I think if you go into something with a little bit of ignorance, into a new field, you can discover new, interesting things," he said.

Last year, NSF's Division of Materials Research in the Directorate for Mathematical and Physical Sciences awarded Dincã a CAREER grant for studies of small molecule reactivity in redox-active MOF materials.