Evidence reveals insights into biological history of the Americas 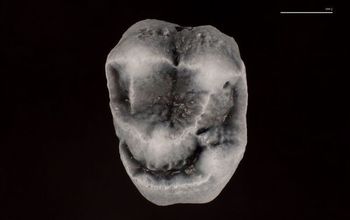 Photograph of the upper molar of 21 million-year-old Panamacebus.

Scientists have discovered the first-ever fossil evidence of monkeys from the North American landmass: a 21-million-year-old specimen that changes our understanding of the biological history of the continent.

The fossil monkey is closely related to living South American monkeys, such as capuchins. It somehow made the journey from South America to North America 15 million years before there was a land bridge to travel across. The discovery, which was supported by the National Science Foundation (NSF), adds a layer of complexity to established theories about the past movement of animals on the continents.

"For a long time, South America -- after its disconnect from Antarctica -- has been thought of as an island continent," said Jonathan Bloch, curator of vertebrate paleontology at the Florida Museum of Natural History and a researcher on the NSF-funded project.

It wasn't until the rise of the Isthmus of Panama, about 4 million years ago that North and South America were connected and animals could migrate between the continents -- a major event known as the Great American Biotic Interchange (GABI).

"This fossil shows us that one of the first waves of GABI happened about 12 million years before our previous record," Bloch said.

The new discovery raises questions about why monkeys never ventured farther into North America. One theory is that the monkeys weren't used to eating the continent's food: They were unwilling to trade South America's tropical fruits for northern acorns.

"There appears to be potentially a barrier between two forests with very different histories," Bloch said.

The researchers actually discovered several fossils from the specimen in Panama: seven tiny teeth ("beautiful teeth," Bloch said). They were uncovered thanks to a once-in-a-century research opportunity created by the expansion of the Panama Canal. The massive construction project -- widening, deepening and adding new locks to the 100-year-old canal -- required digging directly through fossil deposits.

The rainforests of Panama, like tropical environments worldwide, are some of the most biologically diverse areas on Earth.

"There's a great deal to learn about the evolutionary history through the fossil record of the tropics," Bloch said. "But with those beautiful forests comes a downside -- it's incredibly hard to access rock. And you can't access fossils without rocks."

The Canal expansion solved this problem. Bloch and his colleagues have spent the last six years collecting and studying fossils, plus other geological and archeological samples, from the area.

The project was funded through a NSF Partnerships in International Research and Education (PIRE) award. The PIRE program supports robust global collaborations that generate new scientific knowledge and educate the next generation of globally engaged scientists and engineers.

"This Panama Canal project is a stellar example of why PIRE is important," said Jessica Robin, program director in NSF's Office of International Science and Engineering. "It leveraged support from both NSF and institutions in Panama to answer fundamental questions about the history of our continent, forge strong international partnerships and train young researchers."

In addition to the Florida Museum of Natural History at the University of Florida, the Panama Canal PIRE partners included the Panama campus of the Smithsonian Tropical Research Institute, the New Mexico Museum of Natural History and Florida State University. International research collaborators were Panama's Biomuseo, the Universidad de Panamá and Sociedad Mastozoológica de Panamá.

The Panama Canal PIRE has led to a quantum leap in our understanding of the land's biological history, said Bruce MacFadden, distinguished curator of vertebrate paleontology at the Florida Museum of Natural History and principal investigator on the PIRE award.

"We've learned a lot about the plants, the marine life, the vertebrates," MacFadden said. "We're characterizing the ancient biodiversity of the tropics of the Americas."

The fossil monkey -- a new genus and species, given the name Panamacebus transitus -- is the latest addition to this knowledge. It's an ancient species that could help answer questions about our own future, and what might happen to other species in the wake of a changing climate and increased habitat loss.

"What happens to plants and animals when the planet changes?" Bloch said. "That is a question we want to know now because it's important to us. The impossible thing to do is the thing you want to do -- run lots and lots of experiments."

Luckily, Earth has run those experiments already, with events like GABI, which had profound effects on plant and animal migration as well as ocean circulation and global climate. The results are logged in the fossil record.

That information can help scientists make predictions about how plants and animals might respond to changes on the planet in the future, Bloch said. "It helps us think about about how to approach some of the grand challenges that are here today, in terms of life and the planet."

As part of the Panama Canal PIRE's educational outreach, the fossil teeth of P. transitus will be available for downloading and 3-D printing on MorphoSource.