NSF-funded researchers from MIT, the University of Pennsylvania and Harvard work to create methods for rapid robot customization 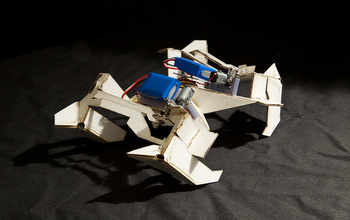 The self-folding mobile prototype developed by researchers at MIT and Harvard.

In the future, we may be able to design and print our own robots that we can control with a smartphone and … oh wait, we can do that today?

Daniela Rus, a MacArthur Fellow and head of the Computer Science and Artificial Intelligence Laboratory (CSAIL) at MIT, is pioneering the science of printable, foldable and DIY robotics with support from the National Science Foundation (NSF).

Working with researchers at the University of Pennsylvania and Harvard University, the project is building a future where 3-D robotic systems can be produced using 2-D desktop technology fabrication methods and programmed using simple natural language commands.

This would be a big departure from today's typical robotics design process.

"A great challenge with today's robots is that it takes a long time to design and fabricate new designs," Rus said. "Many different types of robots are available today, but each of these robots took many years to produce. We need to speed up the creation of robots."

Fabricating new robots, however, is far beyond the scope of most individuals, requiring specialized knowledge in design, assembly, programming and more. Rus and her collaborators are developing a set of methods that would allow one to create custom robots at home, with limited knowledge and widely available tools, in a matter of hours.

From sketches, to design, to printing, fabrication and ultimately control, this new project would completely automate the process, leading to potential transformations in advanced manufacturing and more widespread robot customization and creative use.

Though it sounds like science fiction, Rus and her team are already well along this path.

Part of the solution involved developing ideas and algorithms to design self-folding robots, where the machine is built flat but contains conditions within it to fold into a 3-D structure through the application of heat, electricity or some other means.

One type of 3-D prototype they have designed is composed of a three-layer structure. The top and bottom layers are structural and non-reactive, but the middle layer reacts to heat or electricity and shrinks, acting as a bending control layer and causing the material to take on a 3-D structure.

By cutting gaps in the top and bottom layers, Rus and her team are able to control the bending angle of the material, enabling a range of robot types that can self-fold and then walk, swim, manipulate objects and even self-recycle.

In 2015, the team demonstrated a centimeter-long robot made of conductive materials that, when exposed to electrically charged water, can swim and perform actions in an environment. They even built designs out of acetone that are able to decompose.

In June 2016, they debuted a new version of their origami robot that can be ingested and that can travel through the body to collect and dispose of a swallowed battery -- a function that could prevent thousands of injuries each year.

Rus and her team take this vision of powerful, simple self-folding robots even further and imagine a day when it's possible not only to design small origami robots but to specify a task that you want the robot to do and to have a robot compiler automatically compute a design, a fabrication plan and a programming environment that brings it into being.

A compiler is a computer program or set of programs that transform code written in one programming language into another computer language.

"Many tasks big and small could be automated by rapid design and fabrication of many different types of robots using such a robot compiler," she explains.

In one example posed by Rus and her team, the input, she says, could be as simple as:

"I want a robot to play chess with me"

To achieve this, Rus and her team are creating a database of robot design and control algorithms that are modular and that can be combined to create new robots with a range of abilities.

For instance, a user can specify an ant robot and define its behaviors. The system then computes the modular elements required to bring it into being. This includes physical, printed elements -- the body, legs and joints -- as well as controls that would allow one to manipulate the robot through a smart phone or other device.

They have designed a series of prototypes -- a snake-like robot with pincers, a six-legged walking robot that can follow a line painted on the ground -- that show the feasibility of this approach. It represents one further step towards a future with pervasive, customizable robots.

The project is supported by multiple NSF grants, including an Expeditions in Computing award, which provides $10 million over five years to interdisciplinary, multi-investigator research teams to support transformative computing and information technology research.

The Expeditions projects constitute the largest single investments in computer and information science research NSF makes, and Rus' project is representative of the type of far-reaching thinking and creative approaches that enable brand new fields to emerge.

"We're in a world where computing has become pervasive. It's everywhere like oxygen, and I believe we're at the tip of an explosion," Rus said. "I imagine that in the future, computation and robots will make even more of an impact on our lives."

"And along the way, we will continue to rethink computing to make it different, better, more powerful, and use it to solve humanity's greatest challenges."

NSF's long-term investments in fundamental science and engineering research such as these projects have led to novel machines that safely partner with people in nearly every environment. Visit NSF.gov/robotics for more stories about the emerging robot generation.