The unexpected: Cold snaps in the sub-tropics, drought in rainforests featured at upcoming ecology conference 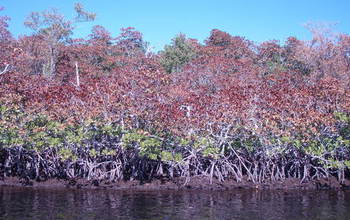 A cold snap in the Florida sub-tropics affected mangrove and other ecosystems.

Cold snaps in sub-tropical ecosystems, life under cities in soils, drought in rainforests, and desertification in grasslands are among the topics featured at the 2016 meeting of the Ecological Society of America (ESA), held from August 7-12, 2016, in Fort Lauderdale, Florida.

Subjects to be addressed include new findings on long-term ecological research, Earth's coupled natural and human systems, and the critical zone: the region between the top of the forest canopy and the base of weathered rock.

Much of the research in these areas is funded by the National Science Foundation (NSF).

"From evolutionary ecology to social-ecological systems science, the ESA 2016 conference is jam-packed with sessions covering the full breadth of ecology," says Alan Tessier, deputy division director of NSF's Division of Environmental Biology, which primarily funds the research highlighted below, along with NSF's Divisions of Ocean Sciences, Earth Sciences, and Atmospheric and Geospace Sciences. "Myriad presentations will highlight important outcomes of NSF funding programs."

Several NSF staff members will attend the meeting, including James Olds, NSF assistant director for Biological Sciences, who will speak with participants at a Navigating NSF: The Who, What, and When of the National Science Foundation workshop on Thursday, Aug. 11, 2016.

Scientists have proposed a new epoch, the Anthropocene, to describe our present time, in which the pervasive presence of humans and the products of human invention have altered the world's atmosphere, oceans and ecosystems.

With a rapidly changing climate, altered hydrologic and nutrient cycles, dominance of large regions by agricultural and urban ecosystems, and massive movements of species to new continents, Earth has entered a new epoch characterized by human influence, many researchers believe.

Understanding the basic principles of ecology is more important than ever before, these scientists say, to predict how new combinations of species in new environments will develop into functioning ecosystems.

This year's ESA meeting -- Novel Ecosystems in the Anthropocene -- will focus on new relationships among species arising from these global changes.

The conference will feature sessions that explore how ecosystem structure and function are responding to multiple drivers of change, how resource managers can cope with new ecosystems, and the potential benefits and problems we face as Earth progresses into the Anthropocene Epoch.

More than 2,000 scientific presentations on new research results fill the program; the meeting will be held at the Greater Fort Lauderdale/Broward County Convention Center.

Among the conference highlights is an extensive slate of talks and poster presentations by NSF-supported researchers. A selection of these sessions follows.

What role do microorganisms play in ecosystems, and what role do they play in nutrient cycling, water and air quality, and carbon storage in soils? Scientist Peter Groffman of the City University of New York will talk about environmental regulation and microbes. Groffman's research is funded by several NSF programs, including the Water Sustainability and Climate Program and the Macrosystems Biology Program.

Ecosystem services provided by trees; and how the evolutionary and biogeographic history of organisms influences community assembly, species composition and ecosystem function in the face of global change. These are two of several areas ecologist Jeannine Cavender-Bares of the University of Minnesota will discuss. Cavender-Bares' work is funded by NSF's Dimensions of Biodiversity Program.

Navigating federal agencies for research and funding opportunities in ecology can be complex, especially for early career investigators. Representatives from several federal agencies and organizations involved in ecological research, along with ESA's Early Career Ecologists Section, will share information about research funding, opportunities and/or fellowships at their institutions. NSF will be represented. After brief introductions from staff members at each organization, representatives will meet with participants to answer questions.

Humans are becoming an increasingly urban species, underscoring the importance of understanding urban ecosystems. That has been the focus of the NSF Central Arizona-Phoenix (CAP) Long-Term Ecological Research site for almost 20 years. Scientists will discuss a new framework for urban ecosystems research developed by CAP scientists and relevant to cities everywhere.

Complex landscapes in the American Southwest: Are desertified systems "novel"?

Degraded shrub-dominated ecosystems that develop following livestock overgrazing and drought in arid and semiarid grasslands are a potential example of new ecosystems in the Anthropocene. Scientists have integrated long-term vegetation maps dating to 1850 with data on grazing, drought, and species composition (from 1915 onward), and Long-Term Ecological Research data (from 1982-present) for the NSF Jornada Basin LTER site in southern New Mexico.

The ecohydrology of forest thinning in a warming Southwest climate

In the U.S. Southwest, increasing temperatures and changes in precipitation can have profound effects on ecosystem function and on water use. Forest responses to drought have been linked with increased risk of severe fires. Forest thinning is often posited as a management practice that can reduce the risk of forest drought responses; it may have implications for groundwater recharge and streamflow. Scientists will discuss an ecohydrologic model to disentangle the multiple factors that influence forest responses to thinning.

Eelgrass (Zostera marina) meadows were found in the outer coastal bays along the Virginia Eastern Shore until 1932, when the meadows disappeared during a North Atlantic eelgrass pandemic. Most of the meadows failed to recover naturally, possibly due to seed failure following the Hurricane of 1933. From 1999 to 2005, 70 million eelgrass seeds were sowed; by 2015, restored eelgrass meadows had taken root. This success provides a rare opportunity, scientists say, to quantify restored eelgrass ecosystem services and benefits at the landscape scale. The research is being conducted at NSF's Virginia Coast Reserve Long-Term Ecological Research site.

Large-scale disturbances such as ice storms are predicted to increase in frequency and intensity under many climate change models. While disturbances are a natural component of forest ecosystems, climate-driven changes in historical patterns may have far-reaching consequences for these ecosystems. Scientists at NSF's Hubbard Brook Experimental Forest Long-Term Ecological Research site in New Hampshire quantified the effects of ice storms on leaf-feeding Lepidoptera (caterpillars). As the most important herbivores in temperate forests, caterpillars in turn serve as critical food sources for breeding birds. Understanding how both birds and caterpillars respond to ice storms will aid in forest management and conservation.

Climate extremes, such as drought, are increasing in frequency and intensity. The economic and ecological consequences of these extreme events can be substantial and widespread. Drought legacies may alter ecosystems for many years post-drought, and may affect future sensitivity to climate extremes. Researchers experimentally imposed two extreme growing season droughts on a central U.S. grassland to assess the effects of repeated droughts on ecosystem response and recovery.

Major questions in paleoecological research cross over to other areas of global change ecology: understanding the forces that drive some species and populations to extinction, assessing the adaptive capacity of species to abrupt climate change, and assessing the predictive ability of ecological forecasting models when confronted by new climates and ecosystems. Advances are enabling increasingly precise and global-scale insights into species and community dynamics during periods of rapid environmental change, from the past ice ages into the Anthropocene, says speaker John Williams of the University of Wisconsin-Madison. Williams' research is funded by NSF's Division of Environmental Biology and Division of Earth Sciences.

Navigating NSF: The Who, What, and When of the National Science Foundation

Sponsored by ESA's Early Career and Researchers at Undergraduate Institutions Sections, this workshop will explain the inner workings of NSF, one of the flagship funding agencies for ecologists. The workshop will begin with three short presentations (approximately 15 minutes each) by NSF staff members: James Olds, NSF assistant director for Biological Sciences, will provide an overview of the structure of NSF. Then NSF rotating program director Alan Wilson will discuss how early career ecologists can become involved as panel reviewers and rotating program officers. Finally, the NSF program director for the National Ecological Observatories Network (NEON), Tim Kratz, will discuss how NSF is evolving with the introduction of NEON, and how early career ecologists can get in on the ground floor. The presentations will be followed by a panel discussion with Olds, Wilson and Kratz. The workshop will provide early career ecologists with information on NSF's structure, new directions, and how to make the most of NSF funding opportunities.

Drought in the rainforest: Biogeochemical responses and feedbacks to climate change

Climate models predict an increase in the frequency and severity of drought in Neotropical rainforests. These environmental conditions are new for humid tropical forests and are likely to lead to changes in biogeochemical cycling, affecting patterns in carbon storage and greenhouse gas emissions, researchers believe. Scientists will report on research on the effects of a severe drought in 2015 in Puerto Rico's Luquillo Experimental Forest, one of NSF's Critical Zone Observatories.

Life under the city: The decomposer community of urban soils

Urban soils are found in a wide range of conditions. Contrary to the view of urban soils as lifeless, a surprisingly rich below-ground community exists in cities, scientists report. Pollutants and fast-food trash support populations of soil microbes and invertebrates. More extreme adaptations to the built environment include living in soil-less habitats -- for example, earthworms in sewer pipes.

Forecasted changes in global climate predict not only shifts in average conditions but changes in the frequency and intensity of climate extremes. In the sub-tropics, extreme cold spells function as a major structuring force for ecological communities and can result in substantial losses to biodiversity, agriculture and infrastructure. If these events persist in the future, it is likely that their effects on sub-tropical communities and ecosystems will become more pronounced, scientists say, as tropical species migrate poleward. Recent extreme cold spells in subtropical China (2008) and the U.S. (2010) occurred in ecosystems that are the subject of long-term ecological studies. Scientists at NSF's Florida Coastal Everglades Long-Term Ecological Research site will report on results of research on cold snaps in the sub-tropics.

Many species have been devastated by the introduction of pathogens to new regions. Wildlife managers are confronted with how to prevent these species from going extinct in the short-term, without compromising the species' ability to evolutionarily respond. Scientists are exploring the trade-offs of different management actions, including vaccination, treatment, disinfection of habitats and demographic augmentation. The presentation will focus on three case studies -- white-nose syndrome in bats, avian malaria in Hawaiian birds and chytridiomycosis in amphibians -- to illustrate how different traits in these species affect short-term and long-term management strategies. The research is funded by NSF's Ecology and Evolution of Infectious Diseases Program.