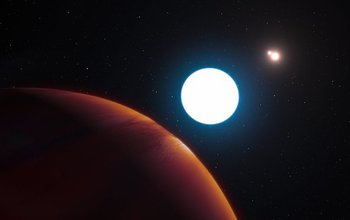 Artist's impression of a planet in a triple-star system discovered by a University of Arizona team.

Kevin Wagner, a first-year Ph.D. student in Daniel Apai's research group at the University of Arizona, served as first author for a paper published Thursday in Science describing the discovery of a planet in a unique position between three stars. Shortly before that, Trevor David, a graduate student working with astronomy professor Lynne Hillenbrand at Caltech, served as first author for a paper in the journal Nature describing the youngest, fully formed exoplanet ever discovered.

"For more than six decades, the GRFP program has identified and supported outstanding graduate students who have the potential to serve as leaders in their fields," said GRFP program director Susan Brennan. "GRFP fellowships provide talented students with the financial freedom to choose their own research projects and to make important discoveries. We're proud to see these fellows producing important work so early in their careers."

If you thought the two suns in the sky of Luke Skywalker's home planet, Tatooine, was strange, imagine this: a planet where you'd either experience constant daylight or enjoy triple sunrises and sunsets each day, depending on the seasons. And those seasons last longer than human lifetimes.

The University of Arizona researchers led a team that discovered such a planet using direct imaging. The planet, HD 131399Ab, is unlike any other known world -- and follows, by far, the widest known orbit within a multi-star system.

"HD 131399Ab is one of the few exoplanets that have been directly imaged, and it's the first one in such an interesting dynamical configuration," said Apai, an assistant professor of Astronomy and Planetary Sciences who leads a research group dedicated to finding and observing exoplanets.

Wagner identified the planet among hundreds of candidate planets and led the follow-up observations to verify its nature.

"For about half of the planet's orbit, which lasts 550 Earth-years, three stars are visible in the sky, the fainter two always much closer together, and changing in apparent separation from the brightest star throughout the year," Wagner said. "For much of the planet's year, the stars appear close together, giving it a familiar night-side and day-side with a unique triple-sunset and sunrise each day. As the planet orbits and the stars grow further apart each day, they reach a point where the setting of one coincides with the rising of the other -- at which point the planet is in near-constant daytime for about one-quarter of its orbit, or roughly 140 Earth-years."

"It is not clear how this planet ended up on its wide orbit in this extreme system, and we can't say yet what this means for our broader understanding of the types of planetary systems out there, but it shows there is more variety out there than many would have deemed possible," Wagner said. "What we do know is that planets in multi-star systems are much less explored, and potentially just as numerous as planets in single-star systems."

Located about 340 light years from Earth in the constellation Centaurus, HD 131399Ab is believed to be about 16 million years old, making it one of the youngest exoplanets discovered to date, and one of very few directly imaged planets. With a temperature of 850 Kelvin (about 1,070 degrees Fahrenheit or 580 degrees Celsius) and weighing in at an estimated four Jupiter masses, it is also one of the coldest and least massive directly imaged exoplanets. The University of Arizona has more information available about the discovery, including clues about how the planet's host stars could be configured.

The Caltech-led discovery involved an even more recently formed exoplanet, K2-33b. At 5-to-10 million years old, the planet is still in its infancy -- the youngest ever detected.

Astronomers have discovered more than 3,000 exoplanets but nearly all are middle-aged, at a billion years or over. For astronomers, attempting to understand the life cycles of planetary systems using existing examples is like trying to learn how people grow from babies to children to teenagers by only studying adults.

The first signals of the planet's existence were measured by NASA's Kepler space telescope during its K2 mission. The telescope detected a periodic dimming in the light emitted by the planet's host star -- called K2-33 -- that hinted at the existence of an orbiting planet. Observations from the W.M. Keck Observatory in Hawaii validated that the dimming was indeed caused by a planet, later named K2-33b.

"At 4.5 billion years old, the Earth is a middle-aged planet -- about 45 in human-years," GRFP fellow David said. "By comparison, the planet K2-33b would be an infant of only a few weeks old."

"The newborn planet K2-33b will help us understand how planets form, which is important for understanding the processes that led to the formation of the Earth and eventually the origin of life," he said.

When stars form, they are encircled by dense regions of gas and dust, called protoplanetary disks, from which planets emerge. By the time a young star is a few million years old, this disk has largely dissipated and planet formation is mostly complete.

The star orbited by K2-33b has a small amount of disk material left, indicated by observations from NASA's Spitzer space telescope, demonstrating that the disk is in the final stages of dissipating. K2-33b was previously identified as a planet candidate in a survey of stars done with the K2 mission, the extended mission phase of the Kepler space telescope.

"Astronomers know that star formation has just completed in this region, called Upper Scorpius, and roughly a quarter of the stars still have bright protoplanetary disks," David said. "The remainder of stars in the region do not have such disks, so we reasoned that planet formation must be nearly complete for these stars, and that there would be a good chance of finding young exoplanets around them."

K2-33b, which is about six times the size of Earth, makes a complete orbit around its host star in about five days. This implies that it is 20 times closer to its star than Earth is to the sun. Like many other exoplanets, it was detected due to the periodic dimming in the central star's light as the planet passes in front of the star. By studying the frequency of dips in the star's light and measuring the degree to which the light dimmed, the team was able to determine the size and orbital period of the planet.

Caltech has more information available on the discovery, including details about how K2-33b may evolve over time.

Related Websites
Kevin Wagner, a first-year Ph.D. student in Daniel Apai's research group at the University of Arizona, served as first author for a paper published Thursday in Science describing the discovery of a planet in a unique position between three stars: http://science.sciencemag.org/content/early/2016/07/06/science.aaf9671
The University of Arizona has more information available about the discovery, including clues about how the planet's host stars could be configured: https://uanews.arizona.edu/story/newly-discovered-planet-has-3-suns