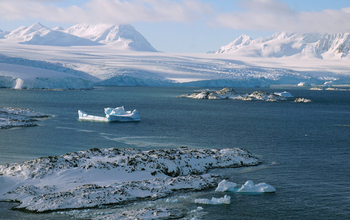 Journalists are invited to submit proposals on a variety of research topics related to Antarctica.

The National Science Foundation (NSF) is accepting proposals from media professionals to visit Antarctica to report on research supported by NSF's Division of Polar Programs through the U.S. Antarctic Program (USAP).

NSF will select journalists whose reporting would help make the broadest possible segment of the public aware of the importance of NSF-supported science conducted in Antarctica.

In addition, competitive proposals would contain both of the following attributes:

Research areas that might be part of a media visit, subject to logistical restrictions, include:

Applicants must be aware of and adhere to the following conditions:

JTF-SFA will review all applications and make a recommendation to NSF on which to support.

Media recommended for support through JTF-SFA will not be given access to science field trips or researchers outside the confines of McMurdo Station. They will have the opportunity to highlight components of Deep Freeze, including strategic inter-theater airlift, tactical deep-field support, sealift, cargo handling, and other support to the Antarctic Program.

Applications to employ unmanned aerial vehicles, or drones, as part of a submission to either NSF or JTF-SFA will require a separate review of that portion of the application to ensure that the proposed use meets NSF's safety and environmental guidelines.

Any request to use drones as part of a media deployment should, at minimum, clearly indicate why this is necessary to achieve the proposed work in Antarctica and contain documentation of the training and experience of the person or persons who will be designated as the operator of the aircraft.

Review of the proposed use of the drone will be independent of, but concurrent with, the media-selection process and it is possible that a person or group selected as a media visitor could be restricted from deploying a drone in the field.

Due to logistical constraints, overnight visits to NSF's Amundsen-Scott South Pole Station will likely not be possible in this year's deployment. Shorter visits may be considered as part of an overall reporting plan.

How to apply: U.S. media receive preference in selection. Applicants must submit to NSF a written expression of interest in participating in the program -- the equivalent of no more than three printed pages -- describing the media in which the reporting will appear and a description of the potential audiences. See also note above about supporting materials indicating a commitment to publish, which would be in addition to the reporting plan.

Competition for the opportunity to deploy is perennially intense, as Antarctic logistics are a constraint on the number of deployments to be supported. Logistical limitations make it extremely difficult to modify itineraries once in Antarctica, therefore a great deal of advance planning with the principals, once selected, will be required to make the proposed visit successful.

This planning will therefore necessitate frequent conference calls and may require some in-person visits to NSF.

Selection: A panel consisting of science and logistics staff from the Division of Polar Programs and media officers from NSF's Office of Legislative and Public Affairs will review all proposals and select finalists. The panel will look for proposals that indicate an understanding of the nature and challenges of NSF's scientific enterprise in the Antarctic as well as the desire and ability to communicate that understanding to the public.

Application: Applications that indicate a solid working knowledge of the U.S. Antarctic Program and its science goals and the ability to communicate the research being undertaken to a wide audience, as described above, stand the best chance of selection.

Peter West, Polar Programs' outreach manager, can discuss with potential applicants the requirements for Antarctic deployment and provide access to NSF-supported researchers who are scheduled to be in the field during the deployment. NSF strongly suggests that potential applicants discuss their proposed deployment prior to submitting an actual proposal.

Deployment period: Deployment would occur some time between late October 2016 and January 2017, for a period of about 10 working days. Actual dates depend on story planning and logistics discussions.

Medical: To deploy to Antarctica, visitors must pass rigorous medical and dental examinations. Applicants' personal or corporate physicians and dentists, using USAP medical screening forms, which will be evaluated by USAP-contracted medical experts, conduct these examinations at the finalists' expense. Certain medical conditions detected during the physical or dental examinations may disqualify a candidate from visiting Antarctica, even if initially selected as a media-visitor finalist.

Expenses: Media selected for the visit, or their employers, pay for round-trip transportation to -- and accommodation in -- Christchurch, New Zealand (or, in the case of Palmer Station, Punta Arenas, Chile). NSF furnishes, at no cost to participants, cold-weather clothing solely for use in the field, as well as housing, transportation, and food while in Antarctica.

Note: From time to time, NSF has received requests for the opportunity to visit NSF facilities from reporters who plan to travel to Antarctica at various times of the year via non-governmental means. Such requests are reviewed on a case-by-case basis. Such requests should be directed, well in advance, to Peter West, whose contact information is listed below.

Send applications and questions to: