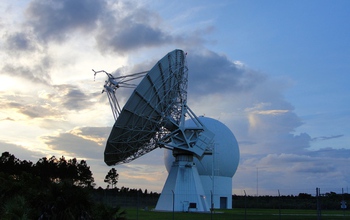 The University of Miami's 20-meter antenna, which was used for GOES-3 communciations.

The National Science Foundation (NSF) late last month decommissioned a 38-year-old communications satellite that for 21 years had helped to link NSF's Amundsen-Scott South Pole Station with the outside world. It was among the oldest, continuously operating satellites in the skies.

The Geostationary Operational Environmental Satellite, or GOES-3, was designed and built as a National Oceanic and Atmospheric Administration (NOAA) weather satellite. After completing its NOAA mission, it was repurposed as a communications satellite to support the NSF-managed United States Antarctic Program.

The satellite's dwindling propellant supply triggered the need to move it to a disposal orbit.

"During its 21 years of operation for the United States Antarctic Program, the GOES-3 satellite provided life-supporting phone and internet communication services to the research community," noted Hans Graber, director of the University of Miami's Richmond Satellite Operations Center at the Center for Southeastern Tropical Advanced Remote Sensing (CSTARS), which had operated the satellite since 1995. CSTARS is part of UM's Rosenstiel School of Marine and Atmospheric Science.

In a cooperative effort with partner organizations, scientists and engineers with CSTARS and the university's physics department planned and executed the maneuvers for the decommissioning, which was completed on June 29.

NSF, NOAA, and Lockheed Martin, which oversaw the university's subcontract to operate the satellite, marked the decommissioning, itself a complex undertaking, as a milestone in telecommunications history.

"This was a carefully planned and collaborative operation," said Art Ibers, vice president of Exploration and Mission Support at Lockheed Martin Information Systems and Global Solutions. "Over 14 days and 20 orbital adjustment maneuvers, the satellite was carefully nudged into a 'graveyard' orbit, safely removed from the other still-operating geostationary satellites by about 250 kilometers. After reaching its higher orbit and ensuring that all fuel on-board had been depleted, the satellite's operators started shutting off its systems one by one, until finally commanding it to turn off telemetry, making it completely passive."

Amundsen-Scott's extreme latitude -- 90 degrees south, directly over the pole -- makes it impossible to "see" most communications satellites, which orbit at or near the equator at an altitude of more than 22,000 miles. GOES-3 was able to communicate with the station because an oscillation in its orbital plane shifted it far enough south for its signals to reach the bottom of the planet for about 6.5 hours per day.

NSF will replace the service provided by GOES-3 with the Defense Satellite Communications System Phase III, vehicle B7 (DSCS III B7) satellite, which is visible from the South Pole for about 3.5 hours per day. As a result, the station will see internet access speeds increase from roughly 1.5 megabits per second (MBPS) under GOES, to up to 30 MBPS under DSCS.

But the increased data volume of the DSCS satellite will primarily benefit researchers who send large quantities of data to their home institutions from sophisticated, large-scale experiments at the South Pole, including the South Pole and BICEP radio telescopes and the IceCube Neutrino Observatory, a massive particle detector built into the ice.

The GOES-3 satellite was launched into geostationary orbit in 1978. By 1989, its weather-observation instruments had failed, so its orbit was modified to allow it be used as a communications satellite.

Since 1995, it's been one of the main satellites used to communicate and provide internet service to the Amundsen-Scott South Pole Station and a variety of deep field science camps in the Antarctic.

NSF, through its subcontractors, took over operation of the satellite in 1999.