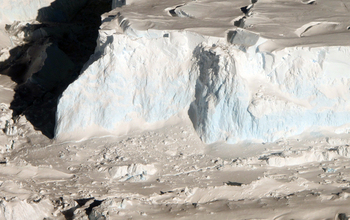 The Thwaites Ice Shelf edge as seen from a NASA Operation IceBridge aircraft in 2012.

The National Science Foundation (NSF) and the U.K. Natural Environment Research Council (NERC) have announced that they will jointly fund as much as $25 million in research, and make available additional funding for associated logistical support, to understand a massive Antarctic glacier whose collapse could significantly affect global sea level.

NSF and NERC issued a solicitation for proposals today to support fieldwork and modeling in the vicinity of West Antarctica's Thwaites Glacier and the adjacent Amundsen Sea.

The agencies will jointly support $20 to $25 million in research over the next five years. Allocation of logistics support for field work would increase that commitment significantly. Logistical commitments will be tailored to the needs of the specific science projects that emerge from a joint merit review process.

Workshops in the US and UK in the past year have noted the future activity of the glacier as an unknown and potential major concern for the fate of the enormous West Antarctic Ice Sheet, which holds enough water to produce the equivalent of more than 3 meters (9 feet) of global sea level rise.

Marine-terminating glaciers like Thwaites, which recede into increasingly deep waters, are particularly sensitive to collapse. If they do so, their movement toward the sea would accelerate. Unlike the Arctic Ocean, where floating ice consists of frozen salt water and melting has no direct effect on sea-level rise, the contribution of freshwater from the Antarctic ice sheet could be enormous.

Satellite measurements indicate that the rate of ice loss near the Thwaites Glacier has doubled in six years, and now accounts for about 10 percent of global sea level rise. Recent studies indicate that the greatest risk for future rapid sea-level rise now comes from the Thwaites Glacier due to the large changes already underway, the potential contribution to sea-level rise, and the fact that a collapse could occur within decades or centuries -- a remarkably rapid change in relatively short geological time.

Reducing scientific uncertainty about the timing and magnitude of the collapse of West Antarctic glaciers is an international priority that was recently underscored by the Scientific Committee on Antarctic Research in its report, Horizon Scan 2020.

A recent National Academy of Sciences, Engineering, and Medicine report, A Strategic Vision for NSF Investments in Antarctic and Southern Ocean Research, cited enhanced capabilities to predict ice loss from West Antarctica as top priority for Antarctic research. It singled out the Thwaites Glacier as a "region of particular concern."

Following a preparatory field season in 2018-2019, the Thwaites fieldwork is expected to begin in the 2019-2020 Antarctic research season, which stretches from October through February.

Related Websites
Thwaites: The Future of Thwaites Glacier and its Contribution to Sea-level Rise: https://www.nsf.gov/funding/pgm_summ.jsp?pims_id=505320