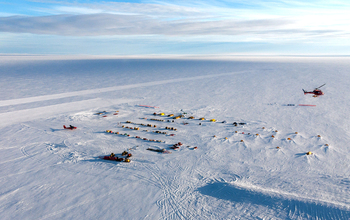 The present-day thinning and retreat of Pine Island Glacier, one of the largest and fastest shrinking glaciers of the West Antarctic Ice Sheet, may have already been underway as early as the 1940s, according to findings from an international research team led by the British Antarctic Survey (BAS), whose fieldwork was facilitated by the National Science Foundation (NSF) via the agency's U.S. Antarctic Program.

The findings were reported in this week's issue of the journal Nature.

"Pine Island Glacier is one of the most inhospitable and remote areas of Antarctica, so to get all the equipment needed to hot-water drill through the ice shelf required a major effort from our collaborators at the U.S. Antarctic Program," said James Smith, a marine geologist with BAS. "On the ground it was a real team effort to lower the drill by hand to the seabed on nearly 1,000 meters of rope. After all that work, the fact that the cores show us something so unexpected and important is a great feeling."

The fate of the West Antarctic Ice Sheet is a major concern to scientists. Pine Island Glacier has thinned and retreated at an alarming rate since 1992, when satellite observations first started. The ice lost from this and neighboring glaciers has added significantly to sea level rise, and this area is one of biggest single unknowns in future projections of global sea level rise. Until now, scientists did not know when the retreat of Pine Island Glacier started, or its underlying cause.

In the BAS study, scientists obtained seabed sediment cores from beneath the floating part of Pine Island Glacier, which revealed a cavity had formed beneath the shelf prior to the mid-1940s. This allowed warm seawater to flow under the shelf, causing it to lift off from the prominent sea floor ridge that held it in place.

The finding strongly suggests that warming of the region associated with El Niño activity initiated the current retreat.

Smith noted the sediment cores, which were obtained through a 450-meter deep hole in the ice and up to 500 meters of ocean, showed how changes halfway around the world in the tropical Pacific could influence the Antarctic ice sheet.

Added Robert Bindschadler, an emeritus researcher at NASA's Goddard Space Flight Center and a co-author on the paper: "A significant implication of our findings is that once an ice sheet retreat is set in motion it can continue for decades, even if what started it gets no worse. It is possible that the changes we see today on Pine Island Glacier were essentially set in motion in the 1940s."

Scientists participating in workshops in the U.S. and U.K. in the past year acknowledged that the future activity of the glacier is an unknown and a potential major concern. The enormous ice sheet holds enough water to produce the equivalent of more than 9 feet (3 meters) of global sea level rise.

David Vaughan, a paper co-author and BAS science director, said that ice loss in this part of West Antarctica has already made a significant contribution to global sea level rise and is one of the largest uncertainties in sea level predictions.

"Understanding what initiated the current changes is one major piece of the jigsaw, and now we are already looking for the next," Vaughan said. "How long will these changes continue and how much ice will Pine Island Glacier and its neighbors lose in the coming century? Data from the U.K.'s iSTAR science program will tell us even more about Pine Island Glacier, but these are big questions that need the international science community to work together."

NSF and the U.K. Natural Environment Research Council recently announced a joint solicitation for proposals to support modeling and fieldwork in the vicinity of West Antarctica's Thwaites Glacier and the adjacent Amundsen Sea, a region that encompasses Pine Island Glacier.