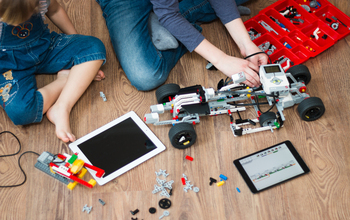 Women account for more than half the U.S. population, but only 30 percent of those employed as scientists and engineers in the country. Researchers are investigating several possible factors that contribute to this disparity -- including the societal stereotype that associates intellectual talent more closely with men than women, according to a new study.

This stereotype affects girls as young as 6 years old, influencing their activity choices, said the study, published in the journal Science. The study's authors, supported by the National Science Foundation (NSF) Social, Behavioral and Economic Sciences Directorate and Education and Human Resources Directorate, used a series of experiments to evaluate the beliefs of 5-, 6- and 7-year-old boys and girls about gender and brilliance.

Stereotypes are powerful. They often influence the types of careers people see themselves in and ultimately choose. Previous research shows that society associates not just ability in math and science with men and boys but also the notion of being "brilliant" -- of having raw brainpower.

The researchers wanted to know if this broader stereotype affects girls' choices.

"Not only do we see that girls just starting out in school are absorbing some of society's stereotyped notions of brilliance, but these young girls are also choosing activities based on these stereotypes. This is heartbreaking," said the study's senior author, Andrei Cimpian, psychology professor at New York University.

Researchers used the phrase "really, really smart" as a child's way of understanding the concept of brilliance. In one experiment, children heard a story about a gender-neutral protagonist described as "really, really smart." They then selected the most-likely protagonist from among pictures of two men and two women. Separately, researchers asked the children to pair certain words like "smart" with either a man or a woman. Using these and similar tests, researchers were able to assess children's stereotypes about gender and intellectual ability.

The scientists also asked girls and boys to evaluate their preferences for two games -- one for "really, really smart" children, the other for children who try "really, really hard."

By age 6, girls were already significantly less likely than boys to say that members of their own gender were "really, really smart," the findings indicated. Those same girls were more likely to avoid games described as for children who are "really, really smart." At age 5, these differences had not yet appeared and both boys and girls associated brilliance with their own gender similarly.

The research team's previous work, focused on adults, found that women are most underrepresented in fields whose members perceive "brilliance" or innate talent as crucial for success -- fields that include many of the sciences. The new research highlights the possibility that these disparities have deep developmental roots.

"This work offers insight into the intransigence of gender disparities in math and science," said David Moore, program director for the NSF Developmental Sciences program. "It highlights the importance of attacking the problem of gender disparities in society, because it shows that we are influenced by the society we encounter starting when we are extremely young."

The study's lead author was Lin Bian, a Ph.D. student in the Department of Psychology at the University of Illinois. Sarah-Jane Leslie, professor of philosophy at Princeton University, was also an author on the research.