Discovery expands the tree of life 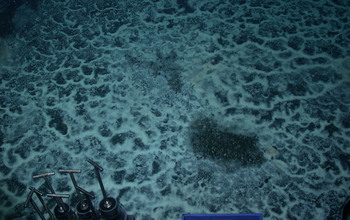 A seafloor hydrocarbon seep is one location where self-mutating microbes were previously found.

Researchers have discovered that previously unidentified microorganisms have a genetic element that enables them to self-mutate. What's more, these organisms are so plentiful they dramatically expand the diversity of the tree of life.

"This discovery reveals how rapid evolution happens in some of Earth's smallest and most common, yet least-known, microbes," said Mike Sieracki, program director in the National Science Foundation's (NSF) Division of Ocean Sciences and co-director of the Dimensions of Biodiversity program, which supported the research.

The new findings appear in the journal Nature Microbiology.

"These microorganisms can be 500 times smaller than bacteria like E. coli," said University of California, Santa Barbara (UCSB) microbiologist David Valentine. "They also do unusual things to some of the key genes used for identification, like splitting them into pieces small enough to render them invisible to scientific surveillance. This, combined with their ultra-small size, explains why they were missed until recently."

Valentine and Blair Paul, also of UCSB, along with scientists from UC Berkeley, UC San Diego and UCLA, showed that DGRs are active in the lineages of certain recently discovered archaea -- primitive, single-celled, bacteria-like microorganisms.

"There is still so much to discover about the microbial world, and this research provides a glimpse into the unique mechanisms that allow adaptation and responses to environmental stress," said Leslie Rissler, co-director of the NSF Dimensions of Biodiversity program.

The researchers analyzed more than 500 microbial genomes out of a pool of 2,500 and found that the majority of a certain class of archaea, as well as a yet-to-be-characterized categories of organisms closely related to bacteria, appear to have DGRs.

"If a microorganism shrinks down its genome and its cell to a very minimal lifestyle, it has to have mechanisms that allow it to evolve new capabilities but also to shed unneeded ones," Valentine said. The DGR mechanism might allow these organisms to do both.

"The finding that DGRs are relatively widespread in tiny bacteria is of great interest because these elements likely contribute to the incredible diversity of protein sequences found in these organisms," said co-author Jill Banfield of UC Berkeley.

While very little is known about how DGRs self-regulate, scientists are finding that the elements are able to guide and target specific sites for mutation. By examining DNA sequences from the genomes, the researchers saw recent mutation activity and observed the mechanism in action.

Four compounds known as nucleotides make up the basic structural unit of DNA: adenine, cytosine, guanine and thymine. The DGR mechanism targets only adenine to initiate a new mutation.

Nucleic acid synthesis and degradation require enzymes. In fact, researchers first discovered the mechanism from a biochemical artifact of an enzyme. A distinctive signature and location, as well as mutations in only the adenine nucleotide, are hallmarks of this mechanism.

Because so much is still unknown about the newly discovered microorganisms, scientists have yet to determine what the vast majority of what the microbes' proteins do.

"An important question is whether these mutations alter the proteins the genes encode, or if they are meant to interrupt the genes themselves and target them for removal from the genome," Paul said. "If this mechanism forces mutations that cause some genes to go defunct, it could be linked with evolutionary benefits."