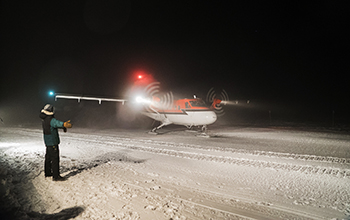 The Smithsonian's National Air and Space Museum will award the 2017 Trophy for Current Achievement to aircrews that flew a mission last summer to evacuate patients from the National Science Foundation's (NSF) Amundsen-Scott South Pole Station in Antarctica.

The mission was unprecedented, taking place at a time of year when the sun had set for the six-month winter. The combination of darkness and extreme cold made flying more hazardous than previous Antarctic rescues.

Two aircrews from Kenn Borek Air Ltd. of Calgary, Canada flew the June 2016 mission in support of the NSF-managed U.S. Antarctic Program. Kenn Borek Air supports research funded by NSF's Office of Polar Programs in both the Arctic and Antarctic.

The honored crews are:

They will receive the award March 29 at a black-tie dinner in Washington, D.C.

This is the second prestigious national award recognizing the aircrews this month. Aviation Week & Space Technology magazine honored them March 2 at its 60th Annual Laureate Awards, which recognize extraordinary aerospace achievements. The crew were the sole awardees in the Heroism category.

"Antarctic research explores both geographic and scientific frontiers," said NSF Director France A. Córdova. "This demanding work requires individual excellence as well as physical courage. I am proud that two of our nation's respected institutions have recognized these aircrews, and grateful to the international teams that, in partnership with NSF, made this globe-spanning success possible."

NSF coordinated operation and related contingency planning for the evacuation, relying on cooperation with other international Antarctic programs around the world, medical professionals and specialists in fields such as weather forecasting and logistics. U.S. Antarctic Program personnel at the South Pole cleared a skiway (a runway for aircraft with ski-equipped landing gear) to allow for a safe landing and takeoff. Other Antarctic personnel at NSF's coastal McMurdo Station -- 800 miles from the pole -- also made preparations in case the flight needed to land there.

Although Kenn Borek Air had flown two previous medical-evacuation flights to the South Pole more than a decade ago, those flights occurred earlier in the Antarctic winter. The 2016 mission involved two ski-equipped Twin Otter aircraft. They flew from Canada, through the U.S. and South America, before landing to stage for the final flight to the pole at Rothera, an Antarctic Peninsula research station managed by the British Antarctic Survey.

One aircraft made the pole flight -- across a continent the size of the U.S. and South America combined. The second waited at Rothera to carry out a search-and-rescue operation, if needed.

"The winners of the 2017 Trophy have achieved daring feats of exploration and determination," said Gen. J.R. "Jack" Dailey, the museum's John and Adrienne Mars director. "The Kenn Borek Air team's successful rescue mission recalls an earlier era of bold achievements, before aviation connected nearly every point on the globe."