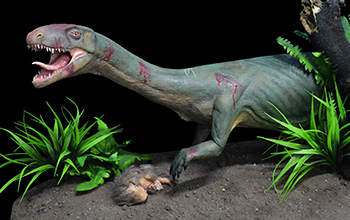 
T. rhadinus is a carnivorous animal living more than 245 million years ago.

Scientists have long wondered what the earliest dinosaur relatives looked like. Most assumed they would resemble miniature dinosaurs, about the size of chickens, and walk on two legs.

The discovery of Teleocrater rhadinus, however, has forced scientists to reassess their ideas. Based on a fossil unearthed in southern Tanzania, these early relatives were carnivorous animals that measured approximately 7-10 feet long, with long necks and tails. Rather than walking on two legs, they walked on four crocodilian-like legs.

The finding, published today in the journal Nature, fills a gap in the fossil record.

"The research sheds light on the distribution and diversity of the ancestors of crocodiles, birds, and dinosaurs," said Judy Skog, a program director in the National Science Foundation's (NSF) Division of Earth Sciences, which funded the research. "It indicates that dinosaur origins should be re-examined now that we know more about the complex history and traits of these early ancestors."

T. rhadinus predated dinosaurs, living more than 245 million years ago during the Triassic Period. It shows up in the fossil record right after a large group of reptiles known as archosaurs split into a bird branch (leading to dinosaurs and eventually birds) and a crocodile branch (leading to alligators and crocodiles). T. rhadinus and its kin are the earliest known members of the bird branch of the archosaurs.

"The discovery of such an important new species is a once-in-a-lifetime experience," said Sterling Nesbitt, a paleobiologist at Virginia Tech and lead author of the Nature paper.

The late paleontologist F. Rex Parrington first discovered T. rhadinus fossils in Tanzania in 1933. The late Alan J. Charig, then-curator of fossil reptiles, amphibians and birds at the Natural History Museum of London, was the first to study those original specimens in the 1950s. Charig could not determine whether the creature was more closely related to crocodilians or to dinosaurs, largely because the specimens lacked ankles and other bones.

The new specimens, found in 2015, clear up those questions. The intact ankle bones and other parts of the skeleton helped scientists determine that the species is one of the oldest members of the archosaur tree and had a crocodilian look.

Nesbitt and his co-authors chose to honor Charig's work by using the name he selected for the animal, Teleocrater rhadinus, which means "slender complete basin" and refers to the animal's lean build and closed hip socket.

"The discovery of Teleocrater fundamentally changes our ideas about the earliest history of dinosaur relatives," said Nesbitt.

The team's next steps are to return to southern Tanzania to find missing parts of the T. rhadinus skeleton.

"It's so exciting to solve puzzles like Teleocrater, where we can finally tease apart tricky mixed assemblages of fossils and shed light on broader anatomical and biogeographic trends in an iconic group of animals," said Michelle Stocker, a paleobiologist at Virginia Tech and co-author of the paper.